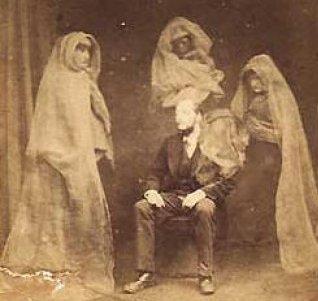 The disembodied have been given over the ages any number of different synonymous names – ghost, ghouly, but to me ‘disembodied soul’ is better because it is what its name suggest a soul without a body – temporarily.

In the diagram I have attempted to show the place of the disembodied soul within the overall scheme of things as described in the observations  – the so called ‘spiritual hierarchy’ –whether this is a ‘celestial hierarchy’ or ‘terrestrial hierarchy’. 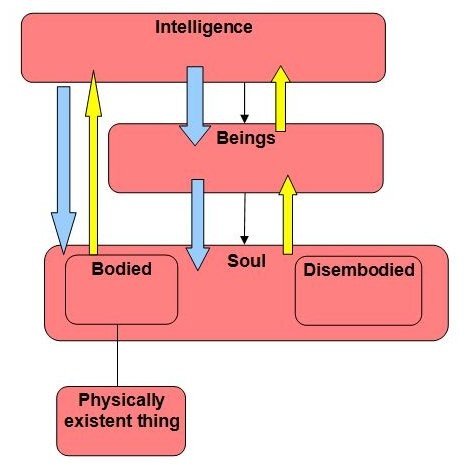 Basically the disembodied soul is at the bottom of the hierarchy.  There are souls of which there are two sorts, embodied and disembodied – one with a body, one without.   Above the soul come ‘Spirit Beings’ [terrestrial hierarchy] and above that come ‘Intelligences’ [Celestial hierarchy] .

I have found evidence that the soul after death is actually stripped of most of its ability to communicate, all its learned function, all functions related  to learning and memory – the memory is removed as well -  and all the functions related to its role as for example a human or dog or some other creature in the physical world.  In the spiritual world a soul has no need of any of this, as such what tends to be left are the perceptions.  Furthermore, according to the observations I have collected, souls do not ‘hang about’ generally speaking, but move on away from contact with the physical world.  Thus any communication with a disembodied soul is with some soul that has missed out on this process.

Furthermore, from the evidence of the observations, the composer of a bodied soul [us] generally does not attempt to make contact with a disembodied soul, but there are some disembodied souls that appear to have a desperate need to communicate with our composers.  Occasionally the purpose is to act as a Spirit helper, but sadly, there are also other reasons of a considerably less benign nature.

The Dangers of Communication from a Disembodied soul

They can also provide 'advice' in the form of auditory hallucinations that is mischievous and dangerous.  You are dealing with a dead person or even a dead animal, they have no more wisdom than you do.  This is the province of the ouiji board and the moving cups, table lifting and mediums.

Time and again I was struck by the willingness that many cultures displayed once [and sometimes still do] to ‘listen’ to disembodied souls.  In some cultures the ‘ancestors’ are looked on as hugely important.  In life, they would probably never have given these people a second hearing, but because these souls attempt to communicate after death they are regarded as oracles.  It doesn’t seem to occur to people that if the majority of people know very little in life; their knowledge is not going to improve on death.   They are going to be as ignorant in death as they were in life.

By allowing themselves to be contacted and possibly possessed by disembodied souls a person has actually contacted not just the bottom rung of the intelligence ladder, but a possibly disruptive and harmful rung at that.  Some old people are wise, but many of them are not.  The fact that the cultures of the past and some cultures of today allow themselves to be directed by people ‘possessed’ as opposed to people who had prayed for guidance in a controlled manner is quite a terrifying thought.  A soul with no useful intelligence to bring to a problem could influence the direction of nations, whereas in life, that person would have been ignored.  For example

Enduring Beyond Oppression - The Truth About Vodou - by: Ross Heaven
The ancestors (zanset yo) are a third spiritual force in Vodou. Even the Haitian national anthem begins with the words, "For the country, and the ancestors, we walk united..." Every family compound has its own ancestral graveyard, many with tombs so elaborate that they sometimes resemble small houses.  In this tripartite system of God, loa, and ancestors … at the centre ... stands the Houngan, or Vodou Priest.

which explains a lot I think.

The difference appears to be that a disembodied soul uses words, voices and speaks to you, but a helper will only ever use symbolic images.  Thus a hallucination, vision or dream which is almost entirely pictorial is from a spirit helper or your composer.  If you receive endless sentences, voices, huge amounts of verbal input – you have reached a disembodied soul.  There is, I might add the possibility that the voices are also from bodied souls.

If I put this another way, voices whether  in your own language and understandable to you or in a foreign language, which speak incessantly in long sentences that last for some time come from soul and nothing higher than that – whether the soul is embodied or disembodied.

Personally I would ignore it.  But it's up to you.

The disembodied [or it may be a bodied] soul may use a person to act as the 'scribe' for their ideas.  This is known as automatic writing and although it can be an effective form of communication because there is a written record which can be studied it is obvious in this case that you are studying the thoughts of another soul, with all their limitations.
I suppose the lesson we should learn from this is that we should be extraordinarily careful about taking advice from voices that ramble on and on and on – whether we receive them directly or are simply acting as the scribe.  They could be no more knowledgeable than us.

A spirit helper only ever uses a very small number of words used symbolically like images,  imagery, and music or sounds they are very keen on puns.  To repeat, no long sentences or endless voices.

Visions of the dead

From the evidence I have gathered, the vast majority of visions, visual hallucinations and dreams that involve the dead, are simply extracts from our perceptions.  Just because someone has a vision of a dead person, this does not mean that the vision proves that it is of the soul themselves.  F W H Myers, came to the same conclusions, when he studied this area ……….

Human Personality and its Survival of Bodily Death – F W H Myers
We have no warrant for the assumption that the phantom seen, even though it be somehow caused by a deceased person, is that deceased person, in an ordinary sense of the word.  Instead of appealing to the crude analogy of the living friend who, when he has walked into the room is in the room, we shall find for the ghost a much closer parallel in those hallucinatory figures .. which living persons can sometimes project at a distance….
Whatever, then, the phantom was – however generated or conditioned – we cannot say that it was himself.  And equally unjustifiable must be the common parlance which speaks of the ghost as though it were the deceased person himself – a revenant coming back amongst living men.

The rule appears to be that if it interacts - responds and inter communicates - then it may be a separate entity.  But we have still to sound a note of caution.

Myers was also very sceptical of many of the communications received from the remaining cases of ‘communication from the dead’ and put them down in some instances to cases of multiple personality. Which means that only a very few examples of genuine communication with disembodied souls actually exist.  They do exist, however and the souls that communicate with us are of very specific types as we have seen.