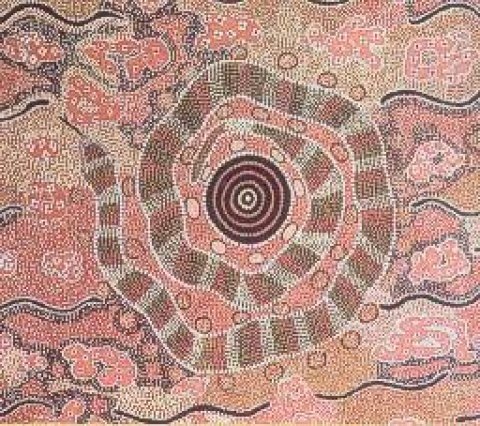 I think the communication was with bodied souls - the other shamans in his tribe, but that is a personal opinion.

Yualai (Euahlayi) medicine men select a boy who is to follow their profession. They take him to a tribal burial ground at night, tie him down, and after having lit some fires of fat (not stated if human) at short distances around him, leave him there. The following is an account of one man’s experiences when so left:

A spirit came/ turned him over, and went. A big star fell beside him, and from it came an iguana (his totem), which ran all over him and then went away. After this, a snake, the hereditary enemy of the iguana, crawled on him, frightening him. Next a huge figure came and drove a yam-stick right through his head, placing in the hole a sacred stone, with the help of which much of the initiate's magic in the future was to be worked. Then "came the spirits of the dead, who corroboreed around him, chanting songs full of sacred lore as regards the art of healing and instructions how, when he needed it, he could call upon their aid." He was released next day by a wizard but was tied down again at night-this time on a bower bird's playground, where he was again visited by spirits of the dead and taught more lore. The bower bird, before being changed into a bird, was a great medicine man. Finally, the postulant was tied down for several nights in case he should be frightened. He was kept away from his camp for about two months and was not allowed to become a practitioner until he was some years older.