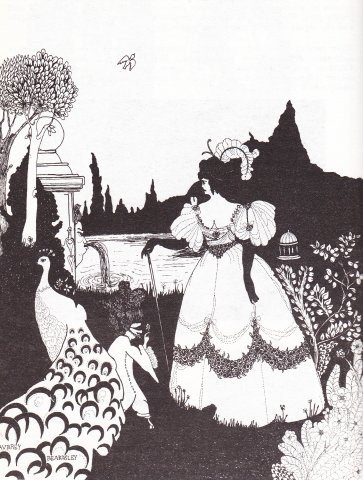 There are peculiarities in some drawings that Aubrey Beardsley has produced through my hand. I noticed it first on one fairly large drawing that obvious mistakes were being made. Sometimes an arm would be drawn quite wrongly and out-of proportion, or a bird might be out of perspective; when this occurred, he appeared to black out and obliterate the area concerned, and turn it into, something totally different, which instead of being left white would be black.

I later learned that Beardsley, when alive, if he made a mistake, as he apparently did frequently, would stick over it another piece of paper. More than any other artist, Beardsley made many mistakes when drawing through me, but instead of covering them over with paper, which obviously he could not do, he inked over them and changed them into something different. He has on occasions made mistakes and not bothered to correct them; on one drawing for example, a peacock has been drawn with the design on the tail the wrong way round.

Most remarkable about these drawings is the speed with which they are drawn. They are usually started in the middle of the paper and then worked out towards the perimeter. They are always drawn straight onto the paper in ink with no preliminary work or pencil outlines. Mistakes hardly ever occur, although on a few of the drawings are some technical faults in perspective or shading.

Although I might spend one or two hours to produce a drawing, it would normally take an artist perhaps six or eight hours to draw the same picture.