Catherine Cavendish - Ouija - A Warning To The Curious...

Catherine is a writer.

This is issuing a death prayer and it is very serious stuff.

Ouija Boards. Harmless bit of fun? Or something more sinister?

I have certainly had a scary experience with a homemade variety, many years ago, in my misspent youth. As a result, I will never go near them again. But more of that later.

My mother tells a story of when she and some ATS friends, during World War II, decided they were going to have a bit of fun and set up their own homespun Ouija board, using a pack of Lexicon cards and a thick glass tumbler. Each of them placed one finger, lightly on the glass. It worked almost immediately. At first they asked it relatively mundane questions and received predictable answers, but then, out of the blue, the glass suddenly started shooting around the board, circling faster and faster. Mum said something felt different about the glass. Up until then, she could easily have believed one of them could have been manipulating it, but now, it was as if the glass had a mind of its own.

Then it started to spell something out. Just one word that struck fear into all of them.

They stared at each other for a few moments until one brave soul (not my mother, she was too scared) asked, “Who?”

Suddenly the glass shot out from under their fingers and across the table, coming to rest in front of a quiet young woman called Desiree. The others looked at her in open-mouthed horror, but she laughed it off. “Silly game”.

Two weeks later, Desiree deliberately rode her bicycle into the path of the London express train.

She had been one for keeping her personal life very much to herself and it was only after her death that her friends learned how violent and unhappy her marriage had been. She came from a well to do family and her marriage to a young man from another well connected family had been presumed since the two of them were children. She had done what her parents insisted upon and married him. He had a drink problem and regularly beat her. In her world, divorce was unthinkable. She could see no way out.

Could she have thrown the glass at herself? Maybe as some last ditch, but too subtle, cry for help? The young women considered it, but it seemed impossible owing to the angle at which she was sitting and the position of her lone finger on the glass. We will, of course, never know, but neither Mum nor any of her friends ever played with an ouija again.

I had known of this story for maybe ten years, but still I had to have my own experience, didn’t I? Two female work colleagues and I did just as Mum and her friends had done and used a lexicon pack, plus postcards with ‘Yes’, ‘No’ and ‘Goodbye’ on them. Needing a fair amount of space and lacking a table big enough, we set up on the (thankfully clean) floor of the Ladies’ washroom. We placed a heavy glass water tumbler in the centre and each positioned one finger lightly on the glass. Giggling with nervous anticipation, we started.

My colleague Mary asked the usual question, “Is there anyone there?”

The glass began to move, gently circling the board.

Mary again piped up, “Who are you?” 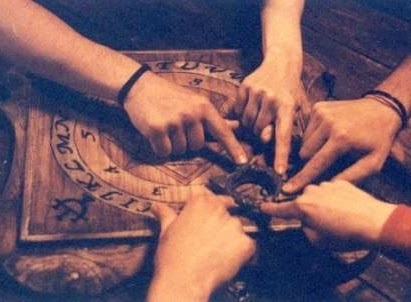 Now it started to spell out something, until the name “Richard” emerged. Although a relatively common name, this rang no bells with any of us.

I gained a little confidence now. “Do you have a message for one of us?”

The glass moved to “Yes”.

“Who is your message for?”

My other colleague, Josie, and I looked at Mary. She had gone a little pale but nevertheless asked the inevitable, “What is your message for me?”

Nothing. The glass didn’t move. We sat in silence for a few moments, exchanging glances. Then Mary asked, “Are you still there?”

The glass skimmed around the floor, pausing at letters and moving off so rapidly it was hard to keep up.  The words were mainly four letter expletives – and they were directed at Mary. This did not feel the same as the seemingly innocuous Richard. Under my finger, I felt the glass pulling away. Josie said she felt the same. So did Mary.

Random words now. ‘Devil’, ‘Satan’, ‘Evil’. But then it spelled out, ‘Devil F***s Mary’. She let out a scream, took her finger off the glass and backed away.  The glass pulled even stronger. It tugged itself away from Josie and I - who were sitting next to each other - hurled itself across the floor and smashed against the far wall. The impact shattered the glass. We stared at it like idiots for a minute or more and I am certain I did not imagine the chill in the room. We all experienced it. That was the first and last time I ever messed around with an ouija. 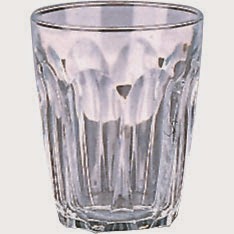 Oh I know, mass hallucination. One of us must have pushed the glass. There are a myriad of perfectly sane and logical explanations but, you weren’t there. You didn’t feel that glass tug away from us. You didn’t see the way it shot across the room, as it someone had hurled it with all their strength. This was a heavy Duralex glass. The sort you could often drop on the floor and they would virtually bounce. At the time it made its dramatic exit, just two of us had one finger each, lightly, on the glass. One was me and I know I wasn’t moving it at any time. The other was Josie. Trust me, it would have taken far more than one of her fingers, plus a degree of skill in the art of throwing, for her to have achieved that result.

You only have to tap in ‘ouija boards’ in your favourite search engine to find a whole host of cautionary tales, warning people not to use them. Some have had far more violent and frightening outcomes than I have. Whether users really do tap into something supernatural or not, it’s clear that some highly undesirable results can – and do – occur.

If you’re still determined to go ahead and ‘have a bit of fun’, nothing I say will stop you.