The death of the Countess von Goertz as told by Count Bohdan K. de Castellane

Bessarabia is a historical region in Eastern Europe, bounded by the Dniester river on the east and the Prut river on the west. Today Bessarabia is mostly (approx. 65%) part of the modern-day Moldova, with the Ukrainian Budjak region covering the southern coastal region and part of the Ukrainian Chernivtsi Oblast covering a small area in the north. 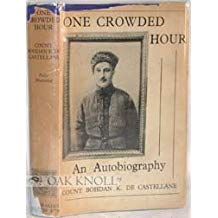 As quoted in  ONE HUNDRED CASES FOR SURVIVAL AFTER DEATH Edited by A. T. BAIRD

From ONE CROWDED HOUR: An Autobiography  1934 by Count Bohdan K. de Castellane

"During our years in Bessarabia the Countess von Goertz, my paternal grandmother, died. ... I never saw her and knew very little about her, but I always heard that she had a very great affection for my father.

This deep feeling between them was evidenced in an interesting and curious manner. One morning, just before receiving the news of her death, my father said to me:

"'Your grandmother has died.'

In response to my question as to whether he had had a letter, he answered: 'No, I have had no letter; but I know that she is dead, because last night I had a dream in which she came to me and brought my coffee, saying: "This is the last time that I shall bring you coffee, son, for today I die."

"Of course I tried to comfort my father, and although I was then only a little boy, I advised him not to believe in dreams. He remained, however, convinced that she was dead and asked me to watch for the post. This arrived every morning by special messenger, who brought it from the station eighty miles away. There were three messengers in constant service who had relays of horses along the route, and were thus able to make the journey in twelve hours.

The next morning brought no news.

Only on the third day did I discover in the mail-bag a telegram from the estate in German Poland, where my grandmother had been living. I took out the telegram and carried it to my father. It was an announcement of grandmother's death at exactly the hour she had appeared to him in his dream.