One of the levels and layers that go to make up the Egg. As can be seen from the diagram below it can be found between the vibrational levels of Earth and Air.

The vibrational levels of Fire, Air, Water and Earth together constitute what is sometimes called the Outward court and in Neoplatonic terms is called the World soul.

The 'lower' one goes vibrationally, the closer one gets to the physical, as such there is an odd reversal that takes place within spiritual experience in that one goes 'down' metaphorically speaking through the vibrational layer of Water to reach so called 'physical reality' of Earth.

It is the level in which one manoevers if one goes out of body, thus although the symbolism used uses the concept of Water as a means of describing the level it may not be ‘seen’ as water [although there are occasions when the composer does construct literally what we are expecting.]

From this single symbolic level and layer come a host of other symbolic meanings.  Since water is above the earth level, any form of spiritual input must figuratively speaking ‘fall’ – hence we see the symbolic use of rain and raindrops or dew.  Similarly any spiritual input which rises from us the so called ‘hot energy’ is figuratively speaking water evaporating as mist or dew.

This symbolism is also used when babies are christened, they are symbolically being anointed with ‘Water’ - spiritual energy. Water symbolically heals, purifies, blesses, and it can ‘dissolve’ things, dissolve away unwanted functionality in order to replace it with new function.

Any form of ceremony which involves water – like the Kabbalah water drawing ceremony or the ritual Shinto and Buddhist uses of water are also symbolically related to the idea that one is figuratively speaking obtaining spiritual energy.

And then we have the ocean and sea or lakes. We are a figurative island in a vast spiritual sea of chaos - unprogrammed energy. In addition to the use of the ocean and sea we also have the symbolism of rivers and streams.  In effect there is a very homogenous symbol system in operation here.

The Water level vibrationally speaking appears to be quite large in extent. Much deeper than the Air level, so although I have shown it in the egg diagram as the same as the other levels this would not be correct. The reason it is so large is because it has to contain the vast number of functions that animate us. The Air level contains some abstract functions like love and hate and joy and bliss, but the Water level has to contain functions that do something – laugh, sing, sneeze, breathe, and so on functions that are directly relate to the operation of each entity.

For this reason, anyone who is ‘shown’ this area in a vision often ‘sees’ it as extremely large and very deep. It has a colour of deep green or at great depths blackish green.  The sounds associated with it were very much as we might expect with noises like the sea.

This area also seemed to be particularly associated in the mystic’s mind with the functions of the subconscious.

There appears to be one more use for the water level.

The following may be difficult to understand but bear with me – I will use the analogy.  In computer software there is a concept called a configuration. This is a state of a system in its entirety at a certain point in ‘time’ a set of functions and programs that operate specific hardware. As systems [hardware and software] are improved, one then moves on to new configurations. Internet Explorer 8.0 was a configuration. It was designed to make use of the new hardware coming along as was Internet Explorer 9.0. In between times you also got different version 8.0.1 and 8.0.2, which are tweaks and improvements to the functions that are there to get them to work OK on the assumed hardware for that configuration.

Now back to our universe. We know that there are evolutionary leaps in species, big jumps forward in the ‘hardware’ with new species suddenly appearing. These would be classified using the analogy as a configuration change.

And the Water level appears to hold past configurations. There are some observations from people with real gifts to travel in this level, who have broken through into areas that were not past lives because they did not feel themselves to be reliving the experience,  but were instead simply watching things and what they saw were past configurations.  I found this very exciting – if we manage to master spiritual travel we no longer have a need to look for fossils to work out the past increments of history, we can go out of body and look! 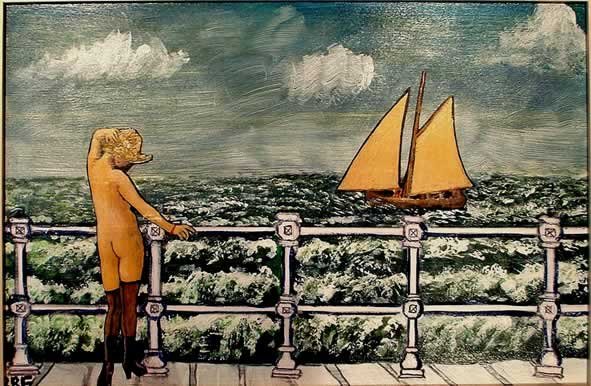 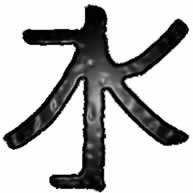 The Chinese  symbol for water shows a
branching river

In the Chinese system, Qi is energy.  Qi then takes various states – it can be programmed [spirit] or not [chaos] and may be input or output.  In Chinese medicine the life giving force for any person or living creature is known as the ‘Vital Qi’.  The Vital Qi is also known as the life giving qi, the qi of life, and the sustaining qi. The character used in the Nanjing equates is ‘flowing water’. It combines a rock or cliff face with water which flows from it – thus more like a mountain from which the vital force of human life comes. There is also the idea within the pictogram of the water being clear pure and flowing.

There is of course a connection between Water and the Earth layer in terms of Creation.  In every single creation myth from the Bible to the Babylonian epic of the Enuma Elish the Earth is formed from the Water layer above.  In essence, the Water vibrational level contains the templates of the forms found at the Earth vibrational level.  As such in the beginning there was only the spiritual ‘water’ level and the templates were then used to form a physical earth.

“When above the heavens did not yet exist nor the earth below,  Apsu the freshwater ocean was there, the first, the begetter, and Tiamat, the saltwater sea, she who bore them all”.

Salt is form dissolved in function [spirit] – the templates.

Tehom in the Bible refers to the primordial waters of creation. It is first mentioned in Genesis 1:2: "veharetz hayta tohu vavohu vekhoshekh al-pnei tehom veruach elohim merakhefet al-pnei hamayyim". "And the earth was without form, and void; and darkness was upon the face of the deep. And the Spirit of God moved upon the face of the waters." (King James version)

The way this was achieved was in a gradually moving spiral from which the Egg was born – if you prefer initially the Egg was only albumen and yolk, and creation as we know it created the shell. No big bang.

Of course the reverse is also possible the Earth layer [so called ‘lower worlds’] may gradually dematerialise back into the Water level which is pure spirit with no form and be ‘infolded’ or ‘indrawn’ into the higher worlds. “Thus, outbreathing and inbreathing can refer to the expansion of the One into the many, and the subsequent reabsorption of the many into the One”.

‘Inbreathing’  as it is called here is how old Configurations are obtained.