Mount Ararat is the tallest peak in present day Turkey with an elevation of 5,137 metres (16,854 ft). This snow-capped, dormant volcanic cone is located in the Iğdır Province, near the northeast corner of Turkey. The Ararat plain runs along its northwest to western side.

Its sacredness is due to its association with the gods of Creation in the original belief systems of the Armenians.   Since ancient times, Ararat has been revered by the Armenians as their spiritual home and as the home of the gods of the Armenian pantheon.  It is particularly interesting as it dominates the plains surrounding it and also has one main peak – the ‘Father’, along with a smaller peak ‘The Mother’.

For some reason, many seem to believe that this mountain is the literal resting place of Noah's Ark after the flood.  But the original story of Noah’s ark talks of a ‘sacred land’ meaning a purely symbolic spiritual land.  The story of Noak’s Ark is itself entirely symbolic.  In 2 Kings 19:37, Isa. 37:38, the word now in Genesis as ‘Ararat’ is rendered "Armenia" in the Authorized Version.  So the translators were unsure how to locate this mythical land.  A similar myth appears in Greek mythology. 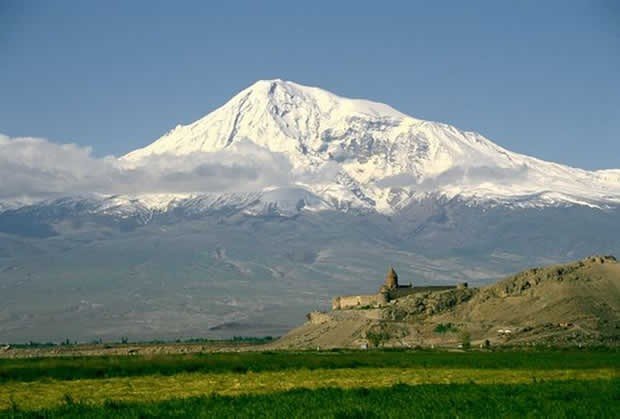 A mountain of stupendous height there stands
Betwixt the Athenian and Boeotian lands,
The bound of fruitful fields, while fields they were,
But then a field of waters did appear:
Parnassus is its name; whose forky rise
Mounts thro' the clouds, and mates the lofty skies.
High on the summit of this dubious cliff,
Deucalion wafting, moored his little skiff.
He with his wife were only left behind
Of perished Man; they two were human kind.
The mountain nymphs, and Themis they adore,
And from her oracles relief implore.
The most upright of mortal men was he;
The most sincere, and holy woman, she.

When Jupiter, surveying Earth from high,
Beheld it in a lake of water lie,
That where so many millions lately lived,
But two, the best of either sex, survived;
He loosed the northern wind; fierce Boreas flies
To puff away the clouds, and purge the skies:
Serenely, while he blows, the vapours driven,
Discover Heav'n to Earth, and Earth to Heav'n.

The billows fall, while Neptune lays his mace
On the rough sea, and smooths its furrow'd face.
Already Triton, at his call, appears
Above the waves; a Tyrian robe he wears;
And in his hand a crooked trumpet bears.
The soveraign bids him peaceful sounds inspire,
And give the waves the signal to retire.
His writhen shell he takes; whose narrow vent
Grows by degrees into a large extent,
Then gives it breath; the blast with doubling sound,
Runs the wide circuit of the world around:
The sun first heard it, in his early east,
And met the rattling ecchos in the west.
The waters, listning to the trumpet's roar,
Obey the summons, and forsake the shore. 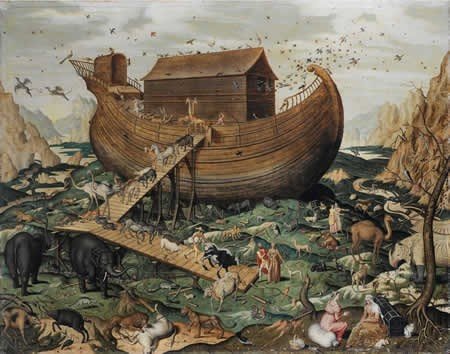