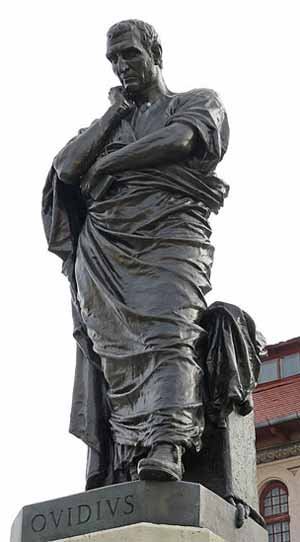 Publius Ovidius Naso (20 March 43 BC – AD 17/18), known as Ovid was a Roman poet who is best known as the author of the three major collections of poetry, the Heroides, Amores and Ars Amatoria, and of the Metamorphoses.

The scholar Quintilian considered him the last of the canonical Latin love elegists.  And in this we can see where Ovid derived his inspiration – love, making love, unrequited love and sexual stimulation, all of which feature very prominently in his poetry.

I found the statue on the left to be somewhat of a severe representation, but I provided the picture anyway, to me the picture below seems more closely to represent his character.

According to Seneca the Elder, Ovid “tended to the emotional, not the argumentative pole of rhetoric”.  He held minor public posts, and resigned to pursue poetry probably around 29–25 BC. His first recitation has been dated to around 25 BC, when Ovid was eighteen. He had a lot of friends -  friendship and companionship [reducing threats]- poets in the circle of Maecenas, Macer, Propertius, Horace, and Bassus.   Ovid was “very popular at the time of his early works”.  He had married three times and divorced twice by the time he was thirty years old. Very popular.

At the same time, he was working on the Fasti, a six-book poem in elegiac couplets which took the Roman festivals calendar  -  the gods  - and astrology as its theme.

And then in 8 AD, Ovid was banished to Tomis, on the Black Sea, by the exclusive intervention of the Emperor Augustus, without any participation of the Senate or of any Roman judge, an event which would shape all of his following poetry.

Ovid wrote that the reason for his exile was – "a poem and a mistake". The Emperor's grandchildren, Agrippa Postumus and Julia the Younger, were banished around the time of his banishment.  The Julian Marriage Laws of 18 BC promoted monogamous marriage to increase the population's birth rate. Ovid's writing in the Ars Amatoria encouraged adultery – so there’s the poem. “However, because of the long distance of time between the publication of this work (1 BC) and the exile (8 AD), some authors suggest that Augustus used the poem as a mere justification for something more personal”.

‘Put in his thumb and pulled out  a plum and said what a good boy am I’ – or maybe a naughty boy. 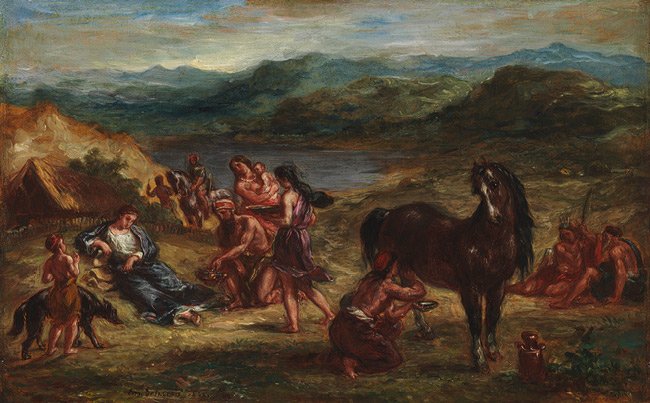 Ovid among the Scythians, painted by Delacroix

In exile, Ovid wrote two poetry collections titled Tristia and Epistulae ex Ponto, illustrating his sadness and desolation – extreme unhappiness.  The five books of the elegiac Tristia, a series of poems expressing the poet's despair in exile and advocating his return to Rome, are dated to 9–12 AD.   He pined for Rome and for his third wife, [grief] as many of the poems are to her. Some are also to the Emperor Augustus, yet others are to friends in Rome, describing his  loneliness and isolation and hope of recall from banishment or exile.

Ovid died at Tomis in AD 17. It is thought that the Fasti, which he spent time revising, were published posthumously. He was allegedly buried a few kilometers away in a nearby town.