Ovid - Metamorphoses - The Story of Daedalus and Icarus

The story of Icarus is  an allegory of a shamanic flight that went wrong – he needed a guide, he didn’t realise that the higher you go the greater the level of vibrational energy [‘heat’] and he was too young and inexperienced to manage, furthermore he would’t accept the advice of an experienced flier…. 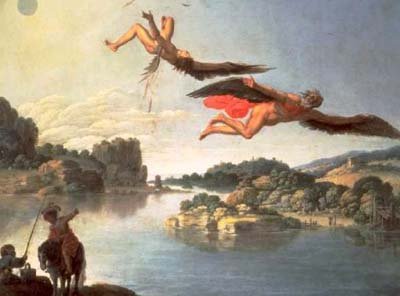 The Story of Daedalus and Icarus

In tedious exile now too long detained,
Daedalus languished for his native land:
The sea foreclosed his flight; yet thus he said:
Though Earth and water in subjection laid,
O cruel Minos, thy dominion be,
We'll go thro' air; for sure the air is free.

Then to new arts his cunning thought applies,
And to improve the work of Nature tries.
A row of quills in gradual order placed,
Rise by degrees in length from first to last;
As on a cliff the ascending thicket grows,
Or, different reeds the rural pipe compose.
Along the middle runs a twine of flax,
The bottom stems are joined by pliant wax.
Thus, well compact, a hollow bending brings
The fine composure into real wings.

His boy, young Icarus, that near him stood,
Unthinking of his fate, with smiles pursued
The floating feathers, which the moving air
Bore loosely from the ground, and wasted here and there.
Or with the wax impertinently played,
And with his childish tricks the great design delayed.

The final master-stroke at last imposed,
And now, the neat machine completely closed;
Fitting his pinions on, a flight he tries,
And hung self-balanced in the beaten skies.
Then thus instructs his child: My boy, take care
To wing your course along the middle air;
If low, the surges wet your flagging plumes;
If high, the sun the melting wax consumes:
Steer between both: nor to the northern skies,
Nor south Orion turn your giddy eyes;
But follow me: let me before you lay
Rules for the flight, and mark the pathless way.

Then teaching, with a fond concern, his son,
He took the untried wings, and fixed 'em on;
But fixed with trembling hands; and as he speaks,
The tears rolled gently down his aged cheeks.

When now the boy, whose childish thoughts aspire
To loftier aims, and make him ramble higher,
Grown wild, and wanton, more emboldened flies
Far from his guide, and soars among the skies.
The softening wax, that felt a nearer sun,
Dissolved apace, and soon began to run.
The youth in vain his melting pinions shakes,
His feathers gone, no longer air he takes:
Oh! Father, father, as he strove to cry,
Down to the sea he tumbled from on high,
And found his Fate; yet still subsists by fame,
Among those waters that retain his name. 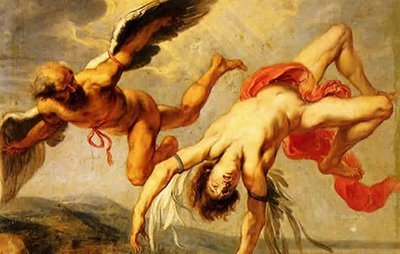