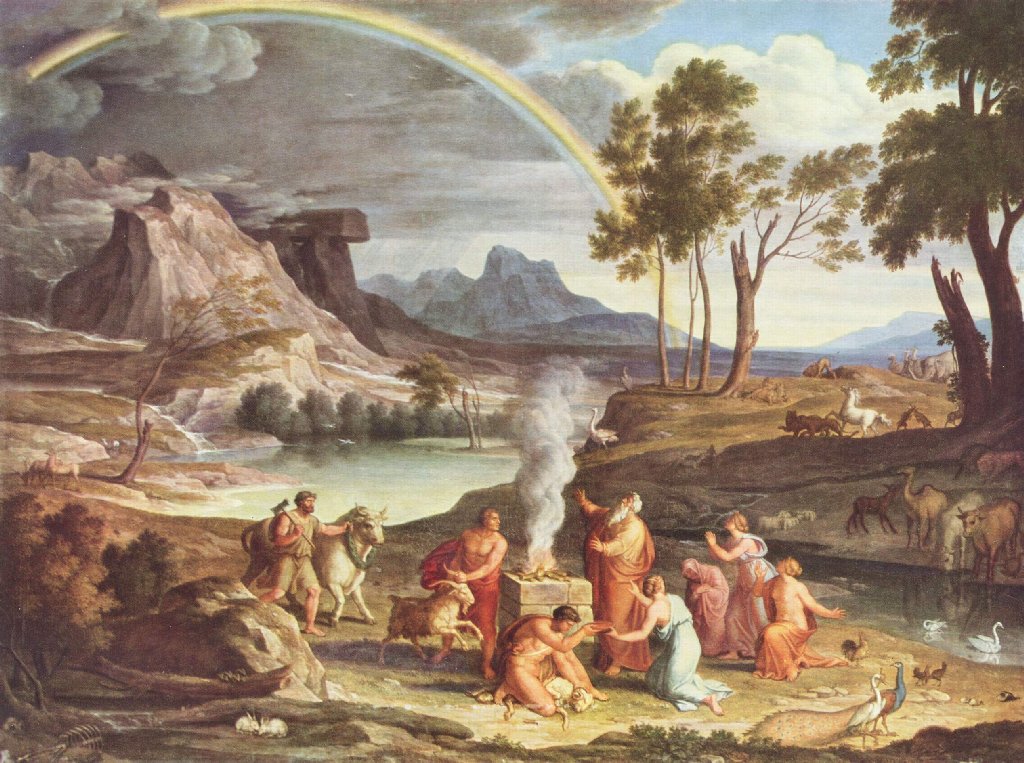 A thin circumference of land appears;
And Earth, but not at once, her visage rears,
And peeps upon the seas from upper grounds;
The streams, but just contain'd within their bounds,
By slow degrees into their channels crawl;
And Earth increases, as the waters fall.
In longer time the tops of trees appear,
Which mud on their dishonour'd branches bear.

At length the world was all restor'd to view;
But desolate, and of a sickly hue:
Nature beheld her self, and stood aghast,
A dismal desart, and a silent waste.

Which when Deucalion, with a piteous look
Beheld, he wept, and thus to Pyrrha spoke:
Oh wife, oh sister, oh of all thy kind
The best, and only creature left behind,
By kindred, love, and now by dangers joyn'd;
Of multitudes, who breath'd the common air,
We two remain; a species in a pair:
The rest the seas have swallow'd; nor have we
Ev'n of this wretched life a certainty.
The clouds are still above; and, while I speak,
A second deluge o'er our heads may break.
Shou'd I be snatcht from hence, and thou remain,
Without relief, or partner of thy pain,
How cou'dst thou such a wretched life sustain?
Shou'd I be left, and thou be lost, the sea
That bury'd her I lov'd, shou'd bury me.
Oh cou'd our father his old arts inspire,
And make me heir of his informing fire,
That so I might abolisht Man retrieve,
And perisht people in new souls might live.
But Heav'n is pleas'd, nor ought we to complain,
That we, th' examples of mankind, remain.
He said; the careful couple joyn their tears:
And then invoke the Gods, with pious prayers.
Thus, in devotion having eas'd their grief,
From sacred oracles they seek relief;
And to Cephysus' brook their way pursue:
The stream was troubled, but the ford they knew;
With living waters, in the fountain bred,
They sprinkle first their garments, and their head,
Then took the way, which to the temple led.
The roofs were all defil'd with moss, and mire,
The desart altars void of solemn fire.
Before the gradual, prostrate they ador'd;
The pavement kiss'd; and thus the saint implor'd.