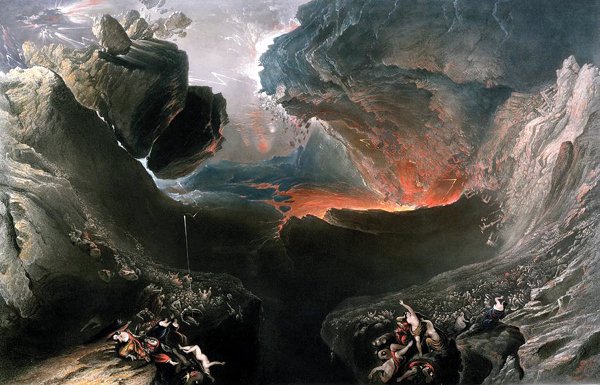 Mankind's a monster, and th' ungodly times
Confed'rate into guilt, are sworn to crimes.
All are alike involv'd in ill, and all
Must by the same relentless fury fall.
Thus ended he; the greater Gods assent;
By clamours urging his severe intent;
The less fill up the cry for punishment.

Yet still with pity they remember Man;
And mourn as much as heav'nly spirits can.
They ask, when those were lost of humane birth,
What he wou'd do with all this waste of Earth:
If his dispeopl'd world he would resign
To beasts, a mute, and more ignoble line;
Neglected altars must no longer smoke,
If none were left to worship, and invoke.
To whom the Father of the Gods reply'd,
Lay that unnecessary fear aside:
Mine be the care, new people to provide.
I will from wondrous principles ordain
A race unlike the first, and try my skill again.

Already had he toss'd the flaming brand;
And roll'd the thunder in his spacious hand;
Preparing to discharge on seas and land:
But stopt, for fear, thus violently driv'n,
The sparks should catch his axle-tree of Heav'n.
Remembring in the fates, a time when fire
Shou'd to the battlements of Heaven aspire,
And all his blazing worlds above shou'd burn;
And all th' inferior globe to cinders turn.
His dire artill'ry thus dismist, he bent
His thoughts to some securer punishment:
Concludes to pour a watry deluge down;
And what he durst not burn, resolves to drown.