Ovid - Metamorphoses - The Story of Phaeton 2 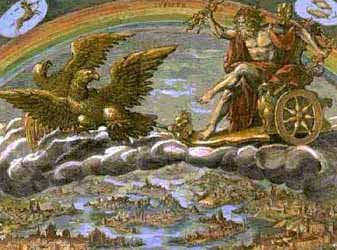 The Story of Phaeton

Thus did the God th' unwary youth advise;
But he still longs to travel through the skies.
When the fond father (for in vain he pleads)
At length to the Vulcanian Chariot leads.
A golden axle did the work uphold,
Gold was the beam, the wheels were orb'd with gold.
The spokes in rows of silver pleas'd the sight,
The seat with party-colour'd gems was bright;
Apollo shin'd amid the glare of light.
The youth with secret joy the work surveys,
When now the moon disclos'd her purple rays;
The stars were fled, for Lucifer had chased
The stars away, and fled himself at last.
Soon as the father saw the rosy morn,
And the moon shining with a blunter horn,
He bid the nimble Hours, without delay,
Bring forth the steeds; the nimble Hours obey:
From their full racks the gen'rous steeds retire,
Dropping ambrosial foams, and snorting fire.
Still anxious for his son, the God of day,
To make him proof against the burning ray,
His temples with celestial ointment wet,
Of sov'reign virtue to repel the heat;
Then fix'd the beamy circle on his head,
And fetch'd a deep foreboding sigh, and said,
"Take this at least, this last advice, my son,
Keep a stiff rein, and move but gently on:
The coursers of themselves will run too fast,
Your art must be to moderate their haste.
Drive 'em not on directly through the skies,
But where the Zodiac's winding circle lies,
Along the midmost Zone; but sally forth
Nor to the distant south, nor stormy north.
The horses' hoofs a beaten track will show,
But neither mount too high, nor sink too low.
That no new fires, or Heav'n or Earth infest;
Keep the mid way, the middle way is best.
Nor, where in radiant folds the serpent twines,
Direct your course, nor where the altar shines.
Shun both extreams; the rest let Fortune guide,
And better for thee than thy self provide!
See, while I speak, the shades disperse away,
Aurora gives the promise of a day;
I'm call'd, nor can I make a longer stay.
Snatch up the reins; or still th' attempt forsake,
And not my chariot, but my counsel, take,
While yet securely on the Earth you stand;
Nor touch the horses with too rash a hand.
Let me alone to light the world, while you
Enjoy those beams which you may safely view."

He spoke in vain; the youth with active heat
And sprightly vigour vaults into the seat;
And joys to hold the reins, and fondly gives
Those thanks his father with remorse receives.

Mean-while the restless horses neigh'd aloud,
Breathing out fire, and pawing where they stood.
Tethys, not knowing what had past, gave way,
And all the waste of Heav'n before 'em lay.
They spring together out, and swiftly bear
The flying youth thro' clouds and yielding air;
With wingy speed outstrip the eastern wind,
And leave the breezes of the morn behind.
The youth was light, nor cou'd he fill the seat,
Or poise the chariot with its wonted weight:
But as at sea th' unballass'd vessel rides,
Cast to and fro, the sport of winds and tides;
So in the bounding chariot toss'd on high,
The youth is hurry'd headlong through the sky.
Soon as the steeds perceive it, they forsake
Their stated course, and leave the beaten track.
The youth was in a maze, nor did he know
Which way to turn the reins, or where to go;
Nor wou'd the horses, had he known, obey.
Then the sev'n stars first felt Apollo's ray,
And wish'd to dip in the forbidden sea.
The folded serpent next the frozen pole,
Stiff and benum'd before, began to rowle,
And raged with inward heat, and threaten'd war,
And shot a redder light from ev'ry star;
Nay, and 'tis said Bootes too, that fain
Thou woud'st have fled, tho' cumber'd with thy wane.

Th' unhappy youth then, bending down his head,
Saw Earth and Ocean far beneath him spread.
His colour chang'd, he startled at the sight,
And his eyes darken'd by too great a light.
Now cou'd he wish the fiery steeds untry'd,
His birth obscure, and his request deny'd:
Now wou'd he Merops for his father own,
And quit his boasted kindred to the sun.

So fares the pilot, when his ship is tost
In troubled seas, and all its steerage lost,
He gives her to the winds, and in despair
Seeks his last refuge in the Gods and pray'r.

What cou'd he do? his eyes, if backward cast,
Find a long path he had already past;
If forward, still a longer path they find:
Both he compares, and measures in his mind;
And sometimes casts an eye upon the east,
And sometimes looks on the forbidden west,
The horses' names he knew not in the fright,
Nor wou'd he loose the reins, nor cou'd he hold 'em right.

Now all the horrors of the Heav'ns he spies,
And monstrous shadows of prodigious size,
That, deck'd with stars, lye scatter'd o'er the skies.
There is a place above, where Scorpio bent
In tail and arms surrounds a vast extent;
In a wide circuit of the Heav'ns he shines,
And fills the space of two coelestial signs.
Soon as the youth beheld him vex'd with heat
Brandish his sting, and in his poison sweat,
Half dead with sudden fear he dropt the reins;
The horses felt 'em loose upon their mains,
And, flying out through all the plains above,
Ran uncontroul'd where-e're their fury drove;
Rush'd on the stars, and through a pathless way
Of unknown regions hurry'd on the day.
And now above, and now below they flew,
And near the Earth the burning chariot drew.

The clouds disperse in fumes, the wond'ring Moon
Beholds her brother's steeds beneath her own;
The highlands smoak, cleft by the piercing rays,
Or, clad with woods, in their own fewel blaze.
Next o'er the plains, where ripen'd harvests grow,
The running conflagration spreads below.
But these are trivial ills: whole cities burn,
And peopled kingdoms into ashes turn.

The mountains kindle as the car draws near,
Athos and Tmolus red with fires appear;
Oeagrian Haemus (then a single name)
And virgin Helicon increase the flame;
Taurus and Oete glare amid the sky,
And Ida, spight of all her fountains, dry.
Eryx and Othrys, and Cithaeron, glow,
And Rhodope, no longer cloath'd in snow;
High Pindus, Mimas, and Parnassus, sweat,
And Aetna rages with redoubled heat.
Ev'n Scythia, through her hoary regions warm'd,
In vain with all her native frost was arm'd.
Cover'd with flames the tow'ring Appennine,
And Caucasus, and proud Olympus, shine;
And, where the long-extended Alpes aspire,
Now stands a huge continu'd range of fire.

Th' astonisht youth, where-e'er his eyes cou'd turn,
Beheld the universe around him burn:
The world was in a blaze; nor cou'd he bear
The sultry vapours and the scorching air,
Which from below, as from a furnace, flow'd;
And now the axle-tree beneath him glow'd:
Lost in the whirling clouds that round him broke,
And white with ashes, hov'ring in the smoke.
He flew where-e'er the horses drove, nor knew
Whither the horses drove, or where he flew.

'Twas then, they say, the swarthy Moor begun
To change his hue, and blacken in the sun.
Then Libya first, of all her moisture drain'd,
Became a barren waste, a wild of sand.
The water-nymphs lament their empty urns,
Boeotia, robb's of silve Dirce, mourns,
Corinth Pyrene's wasted spring bewails,
And Argos grieves whilst Amymone fails.

The floods are drain'd from ev'ry distant coast,
Ev'n Tanais, tho' fix'd in ice, was lost.
Enrag'd Caicus and Lycormas roar,
And Xanthus, fated to be burnt once more.
The fam'd Maeander, that unweary'd strays
Through mazy windings, smoaks in ev'ry maze.
From his lov'd Babylon Euphrates flies;
The big-swoln Ganges and the Danube rise
In thick'ning fumes, and darken half the skies.
In flames Ismenos and the Phasis roul'd,
And Tagus floating in his melted gold.
The swans, that on Cayster often try'd
Their tuneful songs, now sung their last and dy'd.
The frighted Nile ran off, and under ground
Conceal'd his head, nor can it yet be found:
His sev'n divided currents all are dry,
And where they row'ld, sev'n gaping trenches lye:
No more the Rhine or Rhone their course maintain,
Nor Tiber, of his promis'd empire vain.

Lucifer
Signs of the Zodiac

Chariot
Horse
Lucifer
Signs of the Zodiac
Sun and Moon