From The Giant’s War – Ovid Metamorphoses

From hence the surface of the ground, with mud
And slime besmear'd (the faeces of the flood),
Receiv'd the rays of Heav'n: and sucking in
The seeds of heat, new creatures did begin:
Some were of sev'ral sorts produc'd before,
But of new monsters, Earth created more.
Unwillingly, but yet she brought to light
Thee, Python too, the wondring world to fright,
And the new nations, with so dire a sight:

So monstrous was his bulk, so large a space
Did his vast body, and long train embrace.
Whom Phoebus basking on a bank espied;
E're now the God his arrows had not tried
But on the trembling deer, or mountain goat;
At this new quarry he prepares to shoot.

Though every shaft took place, he spent the store
Of his full quiver; and 'twas long before
Th' expiring serpent wallowed in his gore.
Then, to preserve the fame of such a deed,
For Python slain, he Pythian games decreed.

Where noble youths for mastership should strive,
To quoit, to run, and steeds, and chariots drive.
The prize was fame: in witness of renown
An oaken garland did the victor crown.
The laurel was not yet for triumphs born;
But every green alike by Phoebus worn,
Did, with promiscuous grace, his flowing locks adorn. 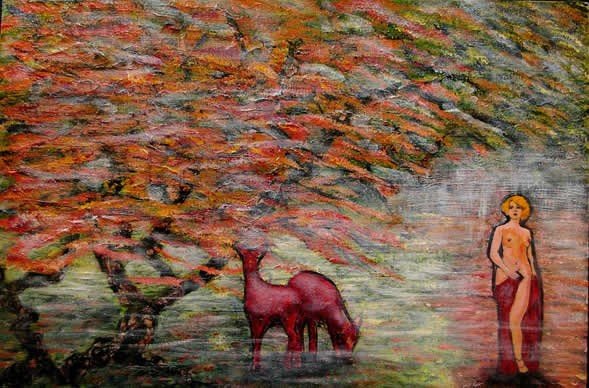