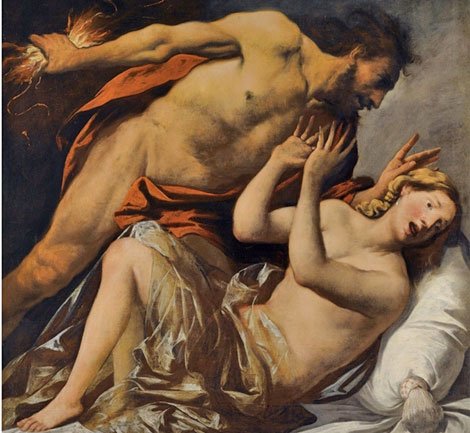 The unwary nymph, ensnared with what she said,
Desired of Jove, when next he sought her bed,
To grant a certain gift which she would choose;
"Fear not," replied the God, "that I'll refuse
Whate'er you ask: may Styx confirm my voice,
Choose what you will, and you shall have your choice."

"Then," says the nymph, "when next you seek my arms,
May you descend in those celestial charms,
With which your Juno's bosom you enflame,
And fill with transport Heaven's immortal dame."
The God surprised would fain have stopped her voice,
But he had sworn, and she had made her choice.

To keep his promise he ascends, and shrouds
His awful brow in whirlwinds and in clouds;
Whilst all around, in terrible array,
His thunders rattle, and his lightnings play.
And yet, the dazzling lustre to abate,
He set not out in all his pomp and state,
Clad in the mildest lightning of the skies,
And armed with thunder of the smallest size:
Not those huge bolts, by which the giants slain
Lay overthrown on the Phlegrean plain.
'Twas of a lesser mould, and lighter weight;
They call it thunder of a second-rate,
For the rough Cyclops, who by Zeus’s command
Tempered the bolt, and turned it to his hand,
Worked up less flame and fury in its make,
And quenched it sooner in the standing lake.
Thus dreadfully adorned, with horror bright,
The illustrious God, descending from his height,
Came rushing on her in a storm of light.

The mortal dame, too feeble to engage
The lightning's flashes, and the thunder's rage,
Consumed amidst the glories she desired,
And in the terrible embrace expired.