A genius is a person in whom inspiration and wisdom predominate over reason and memory . In other words spiritual experience is more important in obtaining ideas than intellect. The essential character of "genius" is in having a talent for producing ideas which no one has ever had before.  They are a group of people whose intuition, imagination and inventiveness appear to come from nowhere.  For both Arthur Schopenhauer and Kant, a genius was also recognisable by their lack of interest in mundane concerns.  In Schopenhauer's words, they ‘fall into the mire while gazing at the stars’. 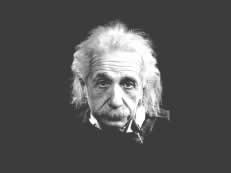 While it is true that scientific results are entirely independent from religious or moral considerations, those individuals to whom we owe the great creative achievements of science were all of them imbued with the truly religious conviction that this universe of ours is something perfect and susceptible to the rational striving for knowledge. If this conviction had not been a strongly emotional one ….. they would hardly have been capable of that untiring devotion which alone enables man to attain his greatest achievements.