Ovid - Metamorphoses - The Story of Coronis and Birth of Aesculapius

The extraction of Asclepius from the abdomen of his mother Coronis by his father Apollo. 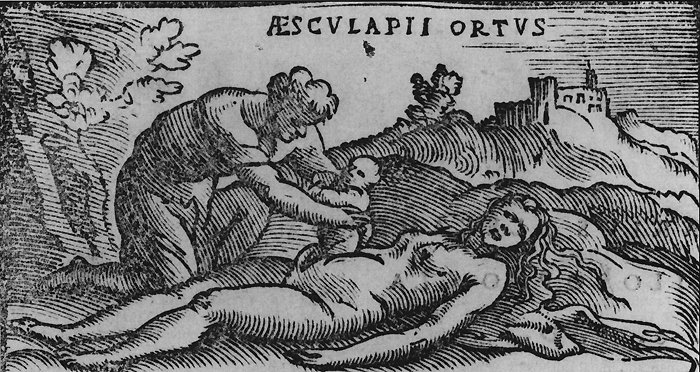 The Story of Coronis, and Birth of Aesculapius

The raven once in snowy plumes was drest,
White as the whitest dove's unsully'd breast,
Fair as the guardian of the Capitol,
Soft as the swan; a large and lovely fowl;
His tongue, his prating tongue had chang'd him quite
To sooty blackness, from the purest white.

The story of his change shall here be told;
In Thessaly there liv'd a nymph of old,
Coronis nam'd; a peerless maid she shin'd,
Confest the fairest of the fairer kind.
Apollo lov'd her, 'till her guilt he knew,
While true she was, or whilst he thought her true.
But his own bird the raven chanc'd to find
The false one with a secret rival joyn'd.
Coronis begg'd him to suppress the tale,
But could not with repeated pray'rs prevail.
His milk-white pinions to the God he ply'd;
The busy daw flew with him, side by side,
And by a thousand teazing questions drew
Th' important secret from him as they flew.
The daw gave honest counsel, tho' despis'd,
And, tedious in her tattle, thus advis'd:
"Stay, silly bird, th' ill-natur'd task refuse,
Nor be the bearer of unwelcome news.
Be warn'd by my example: you discern
What now I am, and what I was shall learn.
My foolish honesty was all my crime;
Then hear my story. Once upon a time,
The two-shap'd Ericthonius had his birth
(Without a mother) from the teeming Earth;
Minerva nurs'd him, and the infant laid
Within a chest, of twining osiers made.
The daughters of king Cecrops undertook
To guard the chest, commanded not to look
On what was hid within. I stood to see
The charge obey'd, perch'd on a neighb'ring tree.
The sisters Pandrosos and Herse keep
The strict command; Aglauros needs would peep,
And saw the monstrous infant, in a fright,
And call'd her sisters to the hideous sight:
A boy's soft shape did to the waste prevail,
But the boy ended in a dragon's tail.
I told the stern Minerva all that pass'd;
But for my pains, discarded and disgrac'd,
The frowning Goddess drove me from her sight,
And for her fav'rite chose the bird of night.
Be then no tell-tale; for I think my wrong
Enough to teach a bird to hold her tongue.

But you, perhaps, may think I was remov'd,

As never by the heav'nly maid belov'd:
But I was lov'd; ask Pallas if I lye;
Tho' Pallas hate me now, she won't deny:
For I, whom in a feather'd shape you view,
Was once a maid (by Heav'n the story's true)
A blooming maid, and a king's daughter too.
A crowd of lovers own'd my beauty's charms;
My beauty was the cause of all my harms;
Neptune, as on his shores I wont to rove,
Observ'd me in my walks, and fell in love.
He made his courtship, he confess'd his pain,
And offer'd force, when all his arts were vain;
Swift he pursu'd: I ran along the strand,
'Till, spent and weary'd on the sinking sand,
I shriek'd aloud, with cries I fill'd the air
To Gods and men; nor God nor man was there:
A virgin Goddess heard a virgin's pray'r.
For, as my arms I lifted to the skies,
I saw black feathers from my fingers rise;
I strove to fling my garment on the ground;
My garment turn'd to plumes, and girt me round:
My hands to beat my naked bosom try;
Nor naked bosom now nor hands had I:
Lightly I tript, nor weary as before
Sunk in the sand, but skim'd along the shore;
'Till, rising on my wings, I was preferr'd
To be the chaste Minerva's virgin bird:
Preferr'd in vain! I am now in disgrace:
Nyctimene the owl enjoys my place.

On her incestuous life I need not dwell
(In Lesbos still the horrid tale they tell),
And of her dire amours you must have heard,
For which she now does penance in a bird,
That conscious of her shame, avoids the light,
The birds, where-e'er she flutters, scare away
The hooting wretch, and drive her from the day."

The raven, urg'd by such impertinence,
Grew passionate, it seems, and took offence,
And curst the harmless daw; the daw withdrew:
The raven to her injur'd patron flew,
And found him out, and told the fatal truth
Of false Coronis and the favour'd youth.

The God was wroth, the colour left his look,
The wreath his head, the harp his hand forsook:
His silver bow and feather'd shafts he took,
And lodg'd an arrow in the tender breast,
That had so often to his own been prest.
Down fell the wounded nymph, and sadly groan'd,
And pull'd his arrow reeking from the wound;
And weltring in her blood, thus faintly cry'd,
"Ah cruel God! tho' I have justly dy'd,
What has, alas! my unborn infant done,
That he should fall, and two expire in one?"
This said, in agonies she fetch'd her breath.

The God dissolves in pity at her death;

He hates the bird that made her falsehood known,
And hates himself for what himself had done;
The feather'd shaft, that sent her to the Fates,
And his own hand, that sent the shaft, he hates.
Fain would he heal the wound, and ease her pain,
And tries the compass of his art in vain.
Soon as he saw the lovely nymph expire,
The pile made ready, and the kindling fire.
Her corpse he kiss'd, and heav'nly incense brought,
He ript her womb, and set the child at large,
And gave him to the centaur Chiron's charge:
Then in his fury black'd the raven o'er,
And bid him prate in his white plumes no more.