Centaurs are hybrids – half animal half human, and a ‘Means of Transport’.  Depending on which animal is the ‘other half’ they take on the attributes of that animal.  Thus as the majority of centaurs are half horse they tend to take on the symbolism of the horse. 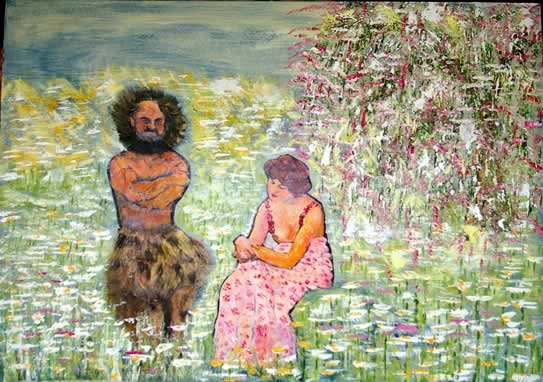 In Greek mythology, the centaurs (from Ancient Greek: Kéntauroi) part human and part horse. In early Attic and Boeotian vase-paintings, as on the kantharos, they are depicted with the hindquarters of a horse attached to them; in later renderings centaurs are given the torso of a human joined at the waist to the horse's withers, where the horse's neck would be.

At the most simple level, the centaur is simply another representation of the shaman in ecstatic flight – a symbol of the ability of a person to ‘fly’ [out of body] like a horse.  But there is also an added symbolism that is gained because of the fusion of the two – some people can only ride horses – their skills are temporary, a centaur has this ability permanently – a human with permanent access to the spiritual world.

Because the roots of the centaur are founded in shamanic society there is an ‘earthiness’ and love of life, sensuality, food, wine, women and all things of this earth that the centaur displays.  They are often very wise and can be kind and loving, but they are always ‘free spirits’ – not capable of being tethered.

It is a creature of excess and overload .  Whereas those who fly via suppression are often shown as simple and chaste, those who fly by overload are shown as full of spiritual energy, strong, virile and sensuous – rather appealing in fact.

The centaur is incorporated into the Zodiac sign for Sagittarius, with the bow and arrow, whose symbolism has been explored  – again a shamanic reference to mystic or visionary travel.

Because they are of the earth, the attributes can verge on the somewhat ‘immoral’  - meaning they are a law unto themselves - and even reckless, they can be warlike or courageous. 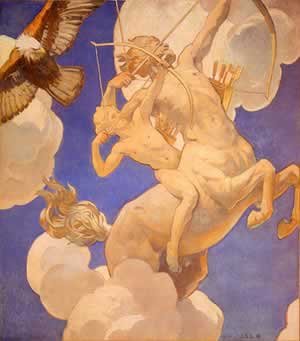 One of the most famous centaurs was Chiron.

There is the possibility that Chiron was a human being who through shamanic devices assumed half horse and half human characteristics.  He certainly assumes the role expected of a ‘good’ shaman as a healer and teacher, as well as the skill of a musician – a spell maker.

In Greek mythology, Chiron (also Cheiron or Kheiron) (Greek: cheiron; "hand") was held as the superlative centaur among his brethren. He was intelligent, civilised and kind, and was known for his knowledge and skill with medicine.

When Achilles' mother Thetis left home and returned to the Nereids, Peleus brought his son Achilles to Chiron, who received him as a disciple.  The great medicine of Asclepius is based on Chiron's teaching. Apollo killed Asclepius' mother Coronis while still pregnant but snatched the child from the pyre, bringing him to Chiron who reared him and taught him the arts of healing and hunting.  Aeson gave his son Jason to the Centaur Chiron to rear at the time when he was deposed by King Pelias. [Jason was the Captain of the Argonauts]. Patroclus' father left him in Chiron's cave, to study, side by side with Achilles, so a lot of famous mythical figures owe their skills to this figure.