One of the more gruesome methods used in initiation is being placed in a sarcophagus or crypt, and figuratively buried alive.  In the picture here we can see this taking place for a ‘knight’, but the entry for the Native American Indians has a considerable number of observations where young males had to undergo the trial of the Vision Pit.  Lame Deer and Leonard Crow Dog both describe this ordeal in some detail in an observation on the site.   The objective is to force rebirth or annihilation [depending on the stage reached].  After such an ordeal they are ‘resurrected’, figuratively raised from the dead by being taken out of the pit or grave.

Dr Horace Fairhurst had probably absolutely no inkling of this common practise in some more shamanic mystic movements.  As such, you will find his report somewhat leaning towards the idea that it must be a smithy.  But it was The Smith, again symbolically speaking, who performed these sorts of ceremonies, so the fact the site is called the Smiddy means nothing.  The Smith was the one responsible for the ordeal by Fire – the last stage in ascension before you broke throught to the aether level.

At the risk of making this entry too long we have added a very helpful explanation by Allen Watson, the son of Alfred Watson author of the Old Straight Track.

Between Earth and Water there is Mire, which is a mixture of the physical and the sensual elements in Man.

Between Water and Air there is Mist, which nicely describes the confused thought consequent on mixing emotion (Water) and reason (Air).

The last intermediate is the Halo or Rainbow, which is the fiery barrier between reason (Air) and final intuition or revelation (Aether).

By these seven symbolical terms we can express the whole range of post-mortem experience of the human soul, as well as the whole range of subjective experience during life. The central Wisdom teaching was that Man had fallen from the highest plane (Aether) to the lowest plane (Earth), and that if he wished to recover his lost estate he must retrace his path upwards through all the elements.

The ritual initiations of the pagan Mysteries expressed through the actual experiences of the candidate the difficult stages in Man's ascent through the elements. There were three initiations. The first was from Earth to Water, the second from Water to Air, and the third from Air to Fire or Aether..

He starts from a high initial point and descends from high estate to EARTH.
He goes along a stoned causeway through a muddy pond: MIRE.
The old track leads straight through a ford: WATER.
Visibility is bad: MIST.
He climbs upward into a clearer in a sphere: AIR.
The blazing beacon on the summit is reflected in a circular moat: HALO.
He arrives at the terminal beacon point FIRE.

After two millenniums we still continue to use exactly the same ley-metaphors to express the permanent realities of Man’s inner life. They are born in us as part of our heritage from the past. We describe a man whose mind and conversation is purely material as 'down-to-earth'. We refer to a sensualist as 'wallowing in the mire’. We say a passionate man is overcome by a 'flood of emotion’ (Water). We speak of a brave man as having received his baptism of Fire'. We speak of a strikingly true thought as a .flash of in- tuition' (Fiery Light). An honest man is said to 'go straight’, identifying the Path with right conduct and morality. 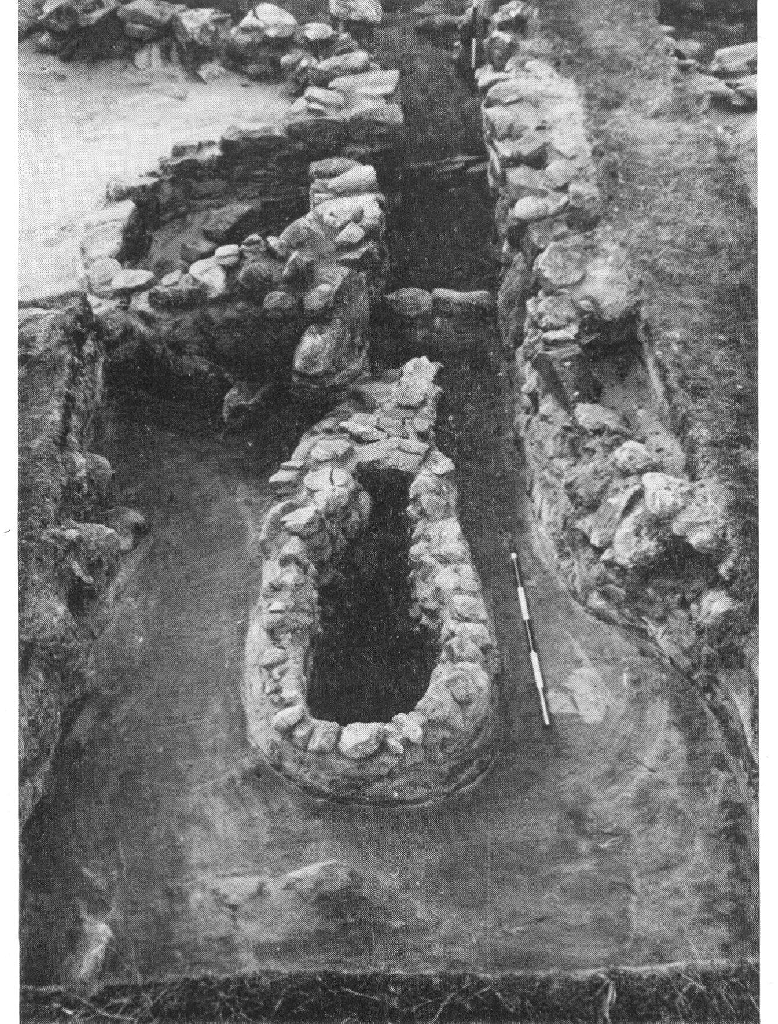 An outstanding discovery on the site was the furnace-like structure between the diverging revetments in the eastern part of the entrance passage (Fig. 3; Pls. 8, 10). No obvious parallels could be recalled and it was not easy to estimate just how much of the original remained at the western end.  The structure was built with flat, rounded stones from the beach without any sign of either mortar or clay packing. It first appeared like a boat outlined in the sand by stones set end to end, save that where the two rows converged at the 'bow', there was a broad prolongation like a platform. The overall measurements were 12 feet 7 inches by 4 feet 6 inches. Excavation of the hollow interior still further emphasised the boat-like form for the sides converged slightly downwards to the flat sandy bottom which, unfortunately, was running with water. Internally, the walls stood 2 feet to 2 feet 9 inches high and enclosed a space 7 feet 9 inches by 2 feet 7 inches; they were 8-9 inches across and only one stone thick. The platform part was more solidly constructed and was found to contain a flue about 10 inches across, shaped like an inverted triangle in cross section and roughly built. It ran very slightly downwards for 4 feet from the north-west corner into the pointed end of the boat-shaped hollow, that is, obliquely to the central line of the structure.

At the outer end, the flue might just possibly have commenced to open out, but this end had obviously been pulled away to make room for the later revetments on either side and for the cell.

Plate 10. A' Cheardach Bheag. The furnace from the east, looking along the extended entrance passage, with the cell on the left.

The sand filling the boat-shaped hollow contained many small potsherds some of which were abraded but all formed a very distinctive group. There were also bones, shells, and some shapeless fragments of what appeared to be 'vitrified' clay, including two pieces about 4 inches across found at the bottom; a handful of charred peat also occurred. Most of this rubbish was suggestive of sweepings thrown into the furnace after it had fallen into disuse.

The sand around the structure also contained rubbish though not to the extent of the filling just described. A relatively heavily carbonised layer indicated an occupation floor which was level with the top stones. The carbonisation, however, was contemporary with the diverging revetments of the passage and therefore later than the furnace which had been damaged by the insertion of this stonework. It seemed clear too, that the furnace was older than the section of the entrance passage with the cell, for apart from the damaged western end, it stood so close that movement in and out would have been most seriously impeded unless the whole structure were buried in sand.

It is inconceivable that a glowing furnace should stand across the only entrance to the dwelling. In any case, another carbonised layer was traced around the boat-like structure which rose about 10 inches above this lower floor. Excavation here produced several pieces of the vitrified clay and some potsherds similar to those of the furnace filling. This lower horizon corresponded to the dark sand underlying the secondary entrance passage to the wheelhouse. The furnace must therefore be considered as a primary feature of the site, lying just outside the southern revetment to the early forecourt.

Peat ash occurred commonly in the eastern part of the mound including the sand around the furnace, but without any unusual concentration there. Nor was there the slightest indication of burning or heating on the stones forming the structure. No slag was found on the site and only one piece of roasted ore was recovered from Bay II, Wheelhouse I .

Small fragments of the vitrified clay, however, were rather frequently noted in the excavations generally.

Specimens of this clay, the large pieces from the bottom of the furnace, were examined by Dr N. Holgate of the Geology Department, the University of Glasgow. From his report it appears that the material may indeed be vitrified clay but contains an admixture of sand. The temperature which had been attained to produce the fusion of the glass in the specimens was at least 1,150-1,200 degrees centigrade. Temperatures of this order almost certainly imply the use of a forced draught. The flue might be interpreted as either a passage for an air current or possibly, since it showed no sign of a clay lining, as a cavity for the tubes of the bellows to reach the base of the furnace represented by the boat shaped hollow. The vitrified material could be the remains of a lining of clay sufficiently thick to give protection to the stonework.

Shortage of wood for charcoal in the Hebrides has always been considered a drawback in metal working, but even if none were available, charcoal could have been manufactured from peat(11) and the occurrence of charred peat in the filling of the furnace may not be coincidence.

Iron smelting seems to have been carried out somewhere in the vicinity of the site as the fragment of roasted ore would indicate. Iron slag has been noted at a number of Hebridean wheelhouses including Garry Iochdrach<12), the nearby A' Cheardach Mhor<13>, Bac Mhic Connain<14), Foshiegarry(15) where a lump of iron 'probably from a bloomery' occurred, and the Allasdale farmhouse*16). In the absence of slag and of bloomery iron at A' Cheardach Bheag, it might be suggested that the furnace was used for the repeated heating in the later stages of carburising the iron and forging to shape. If this interpretation is correct, the name 'The Little Smiddy' is singularly appropriate. 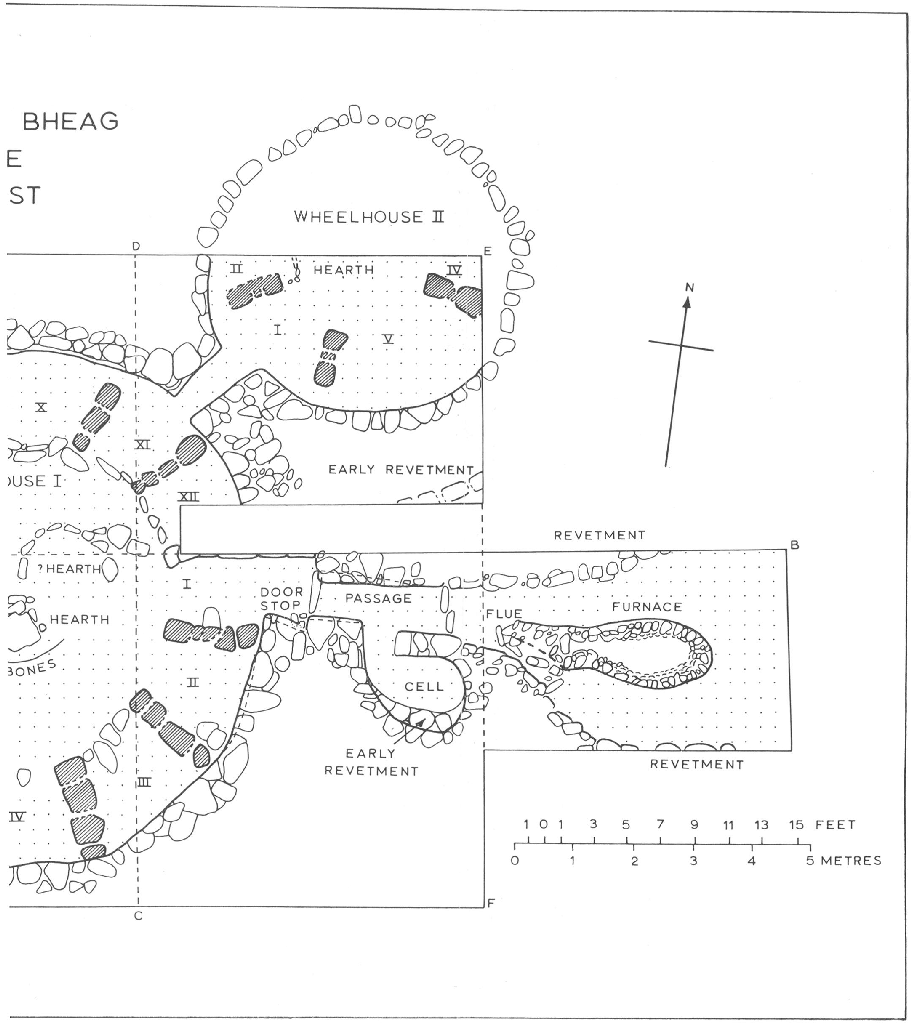