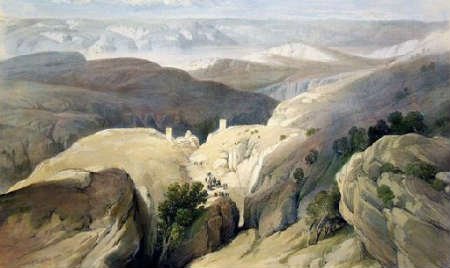 The word ley line is regarded by modern researchers into this aspect of sacred geography to be rather old fashioned, but the word has been incorporated into so many place names in the UK that I think it is worth preserving.

It was Alfred Watkins who first noticed that the sites in the UK could be lined up and interconnected.  Many of them could be aligned, some lines all converged to known sacred sites.  He called the imaginary lines ‘Ley Lines’.  His book about his work has become a classic – ‘The Old Straight Track’.

Alfred Watkins – The Old Straight Track
My main theme is the alignment across miles of country of a great number of objects, or sites of objects of prehistoric antiquity.  And this not in one or a few instances, but in scores and hundreds

The combination of the sacred sites and the lines that link them form a sort of sacred geography, a sacred geography that certainly exists in Europe, but quite probably exists all over the world, as such sites and straight line roads exist on every continent.

After his book was published, a number of amateur readers set about seeing if they could trace out ley lines in their area of the UK and the evidence eventually amassed showed that wherever a study was undertaken, ley lines could be found and they linked across counties and other boundaries.  The UK seemed to be a huge network of such ‘paths’, some extremely long lines stretching for miles and miles as well as a network of smaller lines radiating out from certain points – these were extremely thick on the ground. 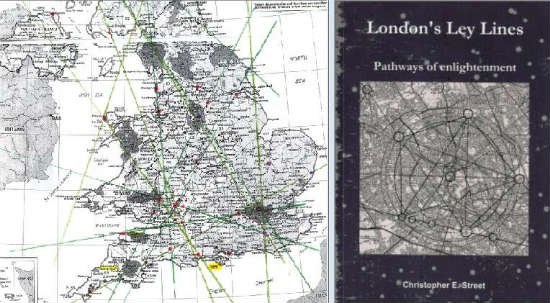 Watkins estimated that ley lines were built during the time of hunter gatherer communities - the sorts of communities that still exist in Australia, parts of Asia and Canada.  The Native American Indians that Hugh Brody has written about in ‘Maps and Dreams’ for example.

In the UK, Watkins believed the hunter gatherers of prehistory lived ‘long before the Neolithic period’ even as far back as the Paleolithic.  He envisaged it as an age where peaceful hunter gatherer communities with little incentive to war amongst themselves but each with known hunting and gathering ‘territories’ ‘built tracks’ to define the boundaries of their territory and to visit ceremonial and religious sites.  It may be worth mentioning here that Alfred knew nothing of either spiritual experience or out of body experience, so imagined all this as being physical.

He further imagined that knowledge of the ‘trackways’ had virtually disappeared by the time of the Roman invasion because no historic record of them exists:

Alfred Watkins – The Old Straight Track
..the ley system must have practically died out before a period of historic record (written language or symbols) commenced in Britain, for it is not recorded

The evidence for ‘spiritual’ ley lines

Watkins was methodical and scientific in his study.  He did not even conjecture that ley lines were ‘spiritual paths’ but treated the whole study as an exercise in trying to find old trackways – physical paths and tracks that had long since gone out of use and disappeared because of the march of time.  He postulated that there were surveyors [called Dods] who, using surveyor like ‘rods’, gradually marked out the paths of the tracks between sites.

Over time, however, he clearly became puzzled at some of his findings:

Alfred Watkins – The Old Straight Track
..firstly how thick the old straight tracks were on the ground; secondly, how few and far between are the fragments remaining of  present day roads or track on the leys

Initially, he appeared to have become worried that he was just making assumptions – the tracks didn’t really exist, they were just imaginary lines he had created.  Then he started to find mark stones, hollow roads, stone rows such as those on Dartmoor, tree avenues apparently leading nowhere and even paved causeways buried several feet deep under the ground and uncovered by accident or by archaeologists, that indeed did follow and mark out the tracks.  Not many, but enough to convince him he was onto something.

He clearly wanted to show that leys existed, but found some of the evidence contradicted the idea of them being physical trackways, he often tried to provide an explanation for the anomalies – at times these appear a little far fetched.  To give him credit, however, he did not expunge the evidence that puzzled him.  His observations, which were entirely factual in nature, showed no bias in either direction.

All his life, in order to ensure his work was taken seriously, Watkins kept to the scientific approach.  But his books are littered with references that show that over time he started to realise that the tracks may have been there, but in some respects they weren’t there.  This appears to have puzzled him throughout his studies, but at no time did he call these roads ‘spiritual paths’ or ‘shamanic flight roads’ or similar.  In the following extracts, I will provide some of the observations that particularly puzzled him and seemed to contradict the idea of these being physical tracks across the landscape.

Alfred Watkins – The Old Straight Track
… The fact has to be faced that if a track is on a sighted ley it does not go along a selected route, but over whatever steep and seemingly improbable obstacle comes in its way..................

The bold way in which the track plunges, not merely towards but directly through pieces of water, both natural and artificial is at first a matter of perplexity….

Most amazing of all experiences in ley hunting is the fact that not only do leys often go precisely through small ponds … but [if there are ] …. paved roads or causeways.. [they] are sometimes found at the bottom of ponds [for example at Holmer and Bridge Sollars].................

And, one might add, for there to be any incentive to build a path directly through the wood when you could go round it.  Watkins postulates that at the time the paths were built, the vegetation might have been different.

Alfred Watkins – The Old Straight Track
…the next objection is that early roads went the easy way – along the sides of the hills – did not cross the thickly wooded valleys and certainly did not go straight up the steep sides of hills, as man would take the easy course

His answer was that the hunter gatherer had a different mentality to present day man!

Clearly if the paths are spiritual and flown over by shamans in ‘out-of-body’ experiences, the fact they go through ponds or over rivers or up vertical hillsides is irrelevant.  No physical traveling is taking place, it is spiritual travel over the landscape following spiritual lines of travel. 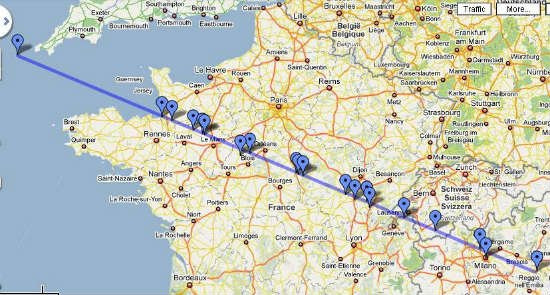 Alfred Watkins – The Old Straight Track
A Surrey correspondent tells of a conical hill, topped with Scotch fir which he purchased since the war.  A timber merchant told him that many applications had been made to purchase the timber during the time of scarcity, but the Government refused to allow it to be cut down, as it was on the line of flight for aeroplanes to France and was used as a sighting mark.

The naming of the places en route - Watkins noted that Black or similar derivations were used in place names on the ley lines to a very considerable extent.
Blag, blake, blac can mean ‘blessed’ or ‘light given’ and the idea of ‘Black ways’ is not at all how we would  interpret it now.  These days black has an association with satanic and dark powers -  the devil, but this association was given it by the Christian Church [probably as a means of stamping out indigenous beliefs].  ‘Black ways’ were ways or tracks associated with Light.
Watkins himself also managed to come to the same conclusion.

Alfred Watkins – The Old Straight Track
Look up the word in the New English Dictionary and it is said to be a ‘word of difficult history’  … it seems to come from blake and blac which even in Anglo Saxon time did not mean without light, but ‘shining, white, pale’ and which has in fact given us ‘bleach’

Another name which was found very frequently and led him to give the tracks the name ley lines is the word ‘ley’.  Many place names on these routes ended with ‘ley’ as well as derivatives ‘lee’, ‘leigh’, ‘legh’ and so on.

Alfred Watkins – The Old Straight Track
The New English Dictionary notes that the word is etymologically connected with …. “leug” to shine