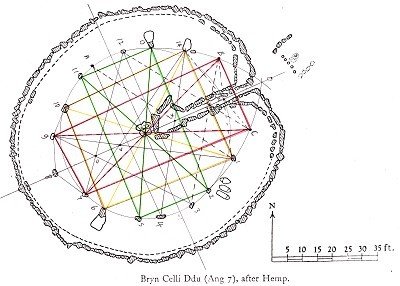 My interest in this site stems from a series of dreams I had almost a year prior to the visit. The dreams featured the entrance to Bryn Celli and involved myself in some form of activity.
I was compelled to study all the archaeological data available on the monument without being fully aware why. I had somehow developed a tangible link with a place which transcended intellectual interest - indeed, this thing was in danger of becoming an obsession, I experienced a sense of fulfilling a cycle when my eventual visit was completed; this is my account of that visit,

The day prior to surveying the site, I experienced quite severe disorientation and a series of remarkable pre-cognitive events.
The actual visit to Bryn Celli was carried out with a clear mind and a real sense of occasion.

The monument is visible from the roadside with the interior structure facing out from a denuded mound, looking deceptively like an entrance. The farm track winds around forcing the visitor to enter the site correctly with the true entrance in full view.
Having completed several circuits of the monument I settled into a dowsing survey which involved the search for underground streams. My first reactions proved quite alarming; I experienced an uncontrollable tremor in the right hand/arm which lasted several minutes. Eventually, this subsided and left me to plot a series of pronounced water-lines crossing the centre of the site, The strongest line followed a course marked by the passage and chamber, passing through ‘W’ and beyond stone ‘h‘.
A series of water-lines converge upon the central point originally marked by the ritual pit, these are of an unequal number; four to the north and six to the south - how these lines connect is unclear but their relative depths lie tens of feet below the surface rather than at shallow depths. This means that dowsable reactions originate in the deeper bedrock and not in the overlying gravel layers.
Despite Hemp’s search for socket holes l, p, and r, no evidence was unearthed in the levels investigated, Dowsing indicates that l and r were missing only by a matter of inches, and that p and q were destroyed during the building of the passage - leaving only weak reaction points.

I carried out a general inspection of the chamber and passage noting a series of impressions which came to me whilst in a deep meditative state;-
On entering the passage, I felt that the recesses either side would have once contained human skulls, stacked one above the other facing into the passage. The stone bench further in could have seated four or five adults - possibly acolytes to the shamen whose business was conducted within the main chamber.
The bætyls opposite the bench are in reach and would have been used in ritual.

The Pillar Stone stands like a sentinel - more human than stone and perfectly hidden from view until the passage has been followed to the end.
The stone was encountered by a local farmer who entered the chamber in 1777; ‘he procured a light and crept forward on hands and knees along the dreary vault, when lo! in a chamber at further end a figure in white seemed to forbid his approach’.
I fully appreciate the poor fellow's mistake.

Whilst standing on the precise point once occupied by the ritual pit, I experienced a sensation of upward air-flow which eddied about my head, (There was no breeze on that day).
It was also noted that from the central pit position, the cap of the nearby menhir could be observed projecting above a prominent local rock outcrop to the NW. A preliminary astronomical study has been made of this stone, the results at present appear inconclusive.
Another stone can be found near the lane leading to the farm.

If we ever needed a demonstration of prehistoric geomancy at work, here it is!
This site most likely started as a gathering point for various woodland animals - followed later by the Neolithic tribes who must have recognized the ‘special’ quality of a single point in the landscape; This, it seems is related to cross-flow of underground water, in a manner much publicized by Guy Underwood.

This was to be developed as a ritual centre possibly marked-out by timber posts - conforming to a sophisticated geometric principle with the central pit containing deposits acting as a precise omphalos.
Interestingly, the cairn builders avoided incorporating the pit within the chamber; possibly to keep knowledge of its existence available only to the priesthood,

Subsequent cultures continued to appreciate the importance of the site and elaborated upon the structure in clear stages. Even though scenes of partial destruction occurred due to the influx of different cultures, the essence of Bryn Celli remained.

During my survey, I noticed that much of the stone scattered around had a lustrous quality owing to its mica content. This strange 'wafer-like‘ mineral has for many years been used as an insulator by the electrical industry. Maybe this property was exploited in some way by the ancients - the chamber forms an almost complete electrical shield.

This concept of shielding, storing and focussing may lead us to the true purpose of Bryn Celli. Perhaps the swirling engravings of the Pattern Stone and the enigmatic single spiral within the chamber are the nearest thing we have to an ‘Owner’s Manual‘.

Lastly, once again we find that such a monument does not stand alone within the landscape, but is part of a larger ritual area.
Bryn Celli Ddu is truly a ‘Place of Power’ and is worthy of further study and admiration. 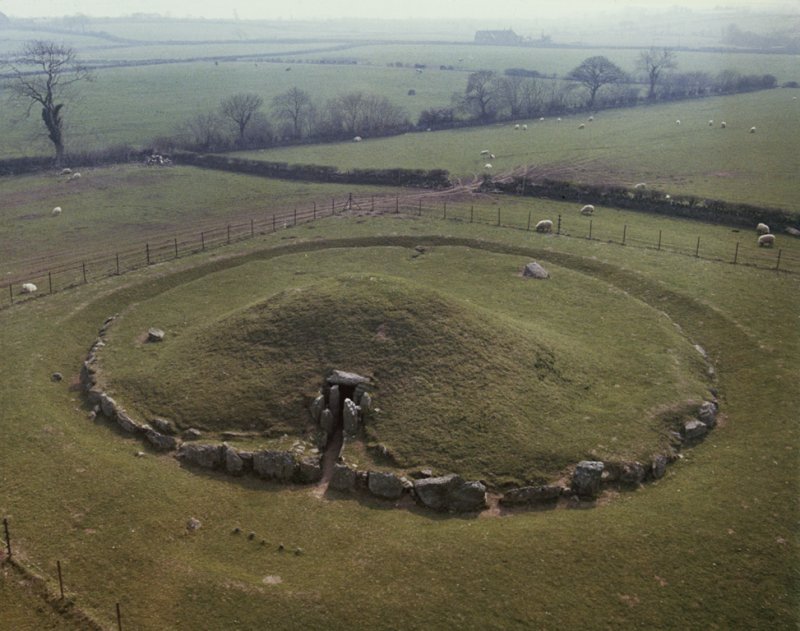 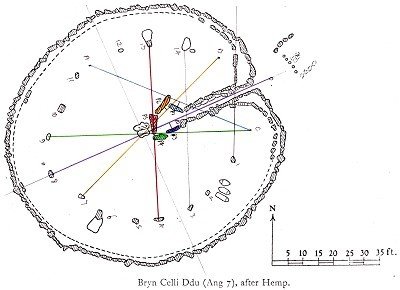