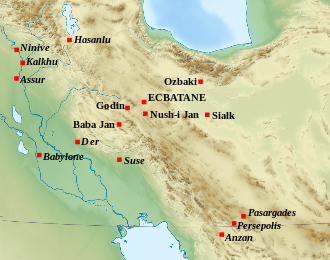 Ecbatana (literally "the place of gathering", Aramaic: אַחְמְתָא‎‎, Ancient Greek: Ἀγβάτανα in Aeschylus and Herodotus, elsewhere Ἐκβάτανα, Agámtanu by Nabonidos, and Agamatanu at Behistun) was an ancient city in Media in western Iran.

According to Herodotus, Ecbatana was chosen as the Medes' capital in the late 8th century BC by Deioces. Under the Persian kings, Ecbatana, situated at the foot of Mount Alvand, became a summer residence. Later, it became the capital of the Parthian kings, at which time it became their main mint, producing drachm, tetradrachm, and assorted bronze denominations. It is also mentioned in the Hebrew Bible (Ezra 6.2) under the name Achmetha (also spelled Ahmetha, e.g. JTS Bible).

The site, even in Herodotus’s time and thus before the main Persian empires was built to sacred geography principles, with the seven levels and layers representing the Planets and the colour coding of the ‘rainbow’.

In the 5th century BC, Herodotus wrote of Ecbatana:

"The Medes built the city now called Ecbatana, the walls of which are of great size and strength, rising in circles one within the other. The plan of the place is, that each of the walls should out-top the one beyond it by the battlements. The nature of the ground, which is a gentle hill, favors this arrangements in some degree but it is mainly effected by art. The number of the circles is seven, the royal palace and the treasuries standing within the last. The circuit of the outer wall is very nearly the same with that of Athens. On this wall the battlements are white, of the next black, of the third scarlet, of the fourth blue, the fifth orange; all these colors with paint. The last two have their battlements coated respectively with silver and gold. All these fortifications Deioces had caused to be raised for himself and his own palace." 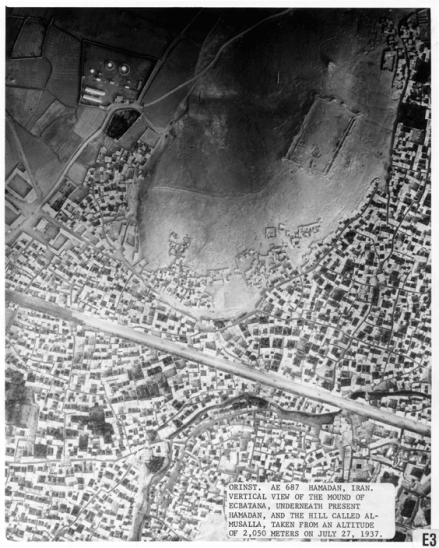