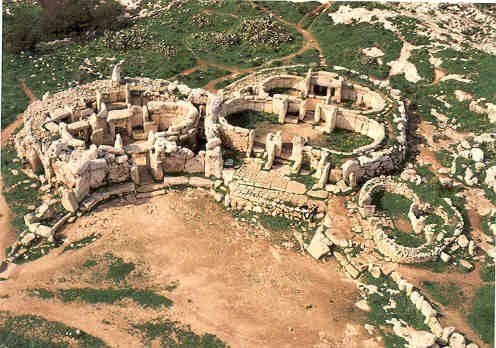 Given the extent of sea water rise – far larger than overall sea level rise because of the flood [Hypothetically caused by a breach in a moraine and glacial waters from the north east or a breach in the straits of Gibralter] there may be a great deal more still to be found under the water, - sacred ways, the cities of those who supported these sites.  As much of the evidence is submerged, it is not possible to state when this area was being used.  It may go back 20,000 years to the Ice Age.
But the temples on top of the mountain of Malta remain.

The Ġgantija Temple in Gozo, for example, is one of the oldest free-standing buildings in the world. The name of the complex stems from the Maltese word ġgant, which reflects the magnitude of the temple's size.

First to be excavated, the Ggantija is also the oldest of the temples, dated to 3600-3000 BC. With its semicircular forecourt and kidney-shaped apses, leading to an altar niche, it became the template for all subsequent Maltese temples.

“Indeed, curves, not straight lines, dominate the Maltese temples and hence, they have been seen as symbols of the uterus, the vagina, the egg – references to the female body, for it was Marija Gimbutas who saw in the Maltese temples another expression of a cult that worshipped the Mother Goddess.”

The Temple period lasted until about 2500 BC, at which point the civilization that raised these huge monoliths ‘seems to have disappeared’.  But had they?  As the waters rose, the people had less and less space in which to live and some may have simply left.

Archaeologists state that ‘After the Temple period came the Bronze Age’.  From this period there are remains of a number of settlements and villages, as well as dolmens — altar-like structures made out of very large slabs of stone.  Once you lose the cave as the place of initiation, the alternative is to build a barrow – a dolmen is simply a kind of barrow, thus it shows that the site was still viewed as sacred, but an alternative method of initiation had to be sought other than the cave. 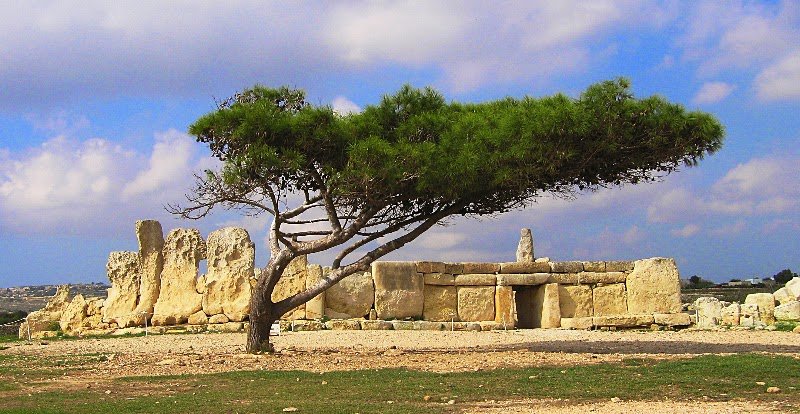