Barrows can be both symbolic and  physically existent and were used to promote spiritual experience - via sensory deprivation and one suspects also fear and hypoxia.

Symbolically a barrow has the same meaning as a 'cave' being both an entrance to the spiritual world and a means of 'doing the dive'.

It is worth noting that the symbolic meaning and the physical reality are not at odds, it is more than likely that a person going out of body by being incarcerated in a barrow for some length of time would indeed 'do the dive'.

One added point of interest about barrows.   Alfred Watkins  was perplexed at the number of barrows  when he did his research on ley lines, more than was needed to mark ley lines or for that matter bury people, rather indicating some were used for just spiritual experience - although some could have been both, there is nothing more likely to promote an out of body experience than being buried alive with your dead relatives.

Alfred Watkins – The Old Straight Track
A perplexing obscurity which is certain to be raised as an argument against the ley [as a track] hypothesis is the enormous number of burial mounds to be found in certain districts, as the Dorset Downs and on Salisbury Plain – the number and their close proximity in many cases appearing to be far in excess of what is necessary as sighting points on leys.  Now the barrows on Salisbury Plain do align in a most remarkable manner, although I have not attempted to give their alignments in this book.  The diagram of Stonehenge shows that (especially in the north west line) certain barrows do align with sighting stones and with the centre of the temple of Stonehenge in a way which cannot possibly be accidental.  But (for example) in the three adjacent barrows in this north west line some are there which do not seem necessary to the mechanism of ley sighting. 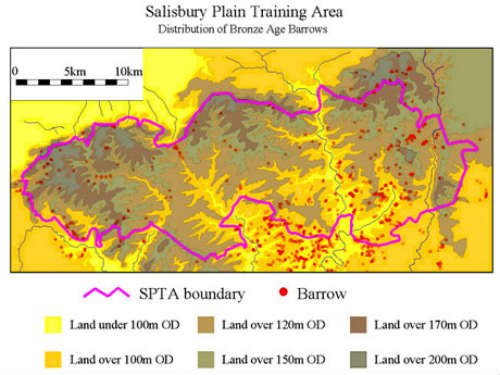 Watkins then goes on to mention other examples in Dorset, Wiltshire and the Yorkshire Wolds where the same observation holds true – very many barrows all aligned, but far more than is needed to mark a physical track.

If however, ley lines are regarded as spiritual rather than physical paths, his observation can be seen in a different light.  It makes sense for any prehistoric people, when burying their dead to place the barrow on the spirit line.  In this way they ensure that the soul has an easier flight to the spirit world and it also makes sense if these are used for spiritual experience to line them up on a known 'line of access'.