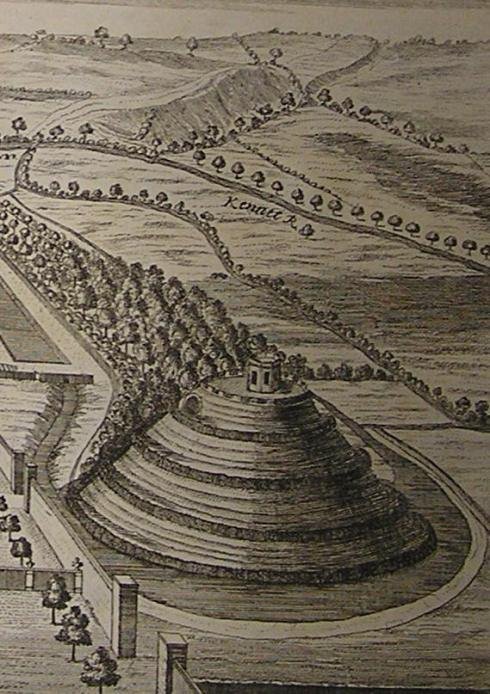 The Marlborough Mound is an Artificial Mound in Wiltshire. It stands in the private grounds of Marlborough College and was the motte on which the keep of Marlborough Castle was built fifty years after the Norman Conquest.  It subsequently became the centrepiece of a major seventeenth century garden.
Dating has confirmed it was originally built in the years around 2400 BC as a smaller sister to Silbury Hill which lies just five miles to the west. (Grid Ref. SU 18363 68674).  Tentative dates suggest that it can be dated to between 2580-2470 BC and as a result of this find, new research has begun to look into other nearby motte sites to see if they also have Neolithic origins.

Excavations in 2000 revealed traces of a ditch near the mound making it a true symbolic site – an artificial hill and ‘island, with surrounding water.  Thus although it has greatly deteriorated, it shows that this area was a major spiritual centre – along with Avebury in ancient times.

Recent radiocarbon dates obtained from two soil cores taken through the Marlborough Castle mound, show the main body of it to be a contemporaneous monument to Silbury Hill.

One of the most fascinating aspects of the dating and the cores is that the researchers have identified two possible flood events early in the construction of the mound. According to the Shaivite traditions, the present Kali Yuga – started about 3,606 BC, and was initiated by a flood.

The topographic location of the mound is in a low-lying area close to rivers and springs and this further adds weight to argument that the entire area is part of massive sacred geography, far larger than possibly envisaged.  The land to the south of the mound has been identified as an area for future research and will cover the Sherrington mound and at least one of three at Hampstead Marshall.

It is worth adding that elsewhere, other mottes have been demonstrated to utilise prehistoric earthworks, for example Tenbury Wells, Hereford & Worcestershire. Droughduil, the mound adjacent to the palisaded enclosure at Dunragit, Scotland, was formerly considered to be a motte but its size, 50m in diameter and 10m in height, coupled with the results of recent excavations that encountered a Bronze Age cairn on the summit as well as OSL dates, has encouraged comparisons with Silbury Hill. Castle Hill, Catterick, in Yorkshire, is a further motte site, in this case with insight of the palisaded enclosure at Marne Barracks that has been suggested as potentially Neolithic. It is possible that medieval fortifications utilised pre-existing earthworks on a more regular basis than hitherto recognised. Adapting and modifying what is already there makes perfect sense and by so doing perhaps also appropriating the legitimacy of ancient sites of power; certainly this process has been recorded or suggested in a number of instances. “While it is unwise to question the date of all supposed motte sites that occur in similar topographic locations, the dates from the Marlborough Mound have opened a Pandora’s Box of potentialities.”

In 1067, William the Conqueror assumed control of the Marlborough area and set Roger, Bishop of Salisbury, to building a wooden motte-and-bailey castle on the prehistoric mound.  The existing clergy appear to have been none too happy at its change of use and Ethelric, bishop of Selsey, was imprisoned and died there in 1070.  William took over the Savernake Forest as a favourite royal hunting ground, a move likely to have provoked considerable resentment, as forests also have symbolic significance in any sacred landscape.  He then made Marlborough Castle a royal residence.

Overall one gets the impression that William from the start attempted to impose his will on the locals by desecrating a sacred site.  Stone was later used to strengthen the castle, around 1175 and that stone appears to have been taken from other monuments.  Marlborough Castle itself ceased to be used in 1370 and fell into disrepair, but remained Crown property. Edward VI then passed it to the Seymour family, his mother's relatives.  The castle was in ruins by 1403.

The present Marlborough College was built by the Seymour family as a residence for Charles Seymour, 6th Duke of Somerset, again it may have used stone from the sacred site.  The house then became the nucleus of Marlborough College, founded in 1843.  As such further building work may have deprived the area of a great number of sacred monuments

The site is a Scheduled Monument. All that remains today is a tree-covered earthworks mound, within the grounds of Marlborough College. 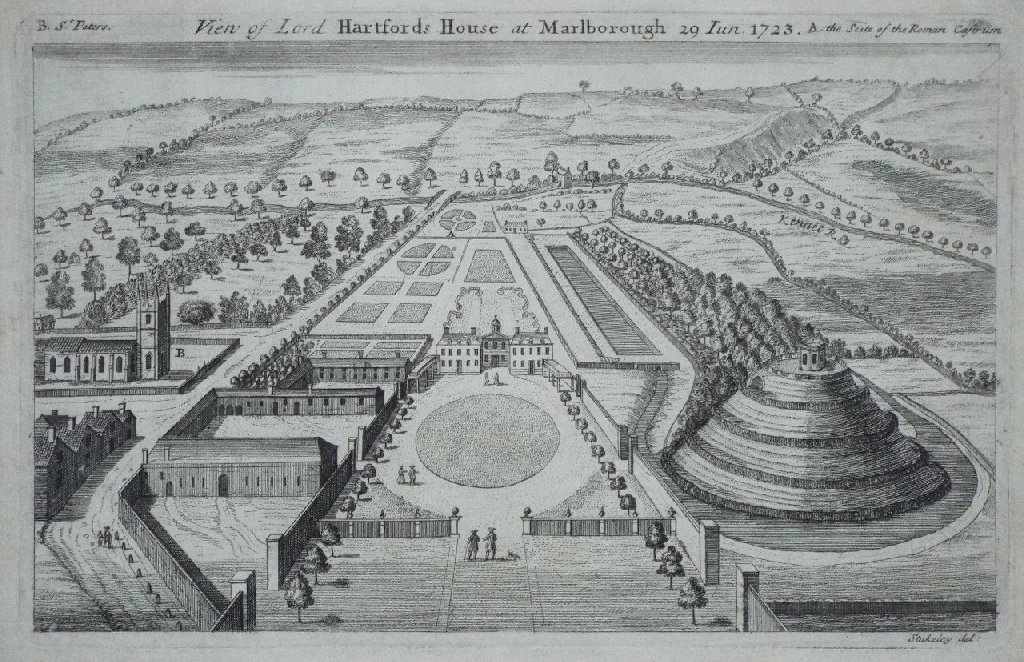 Increments of evolution
Levels and layers