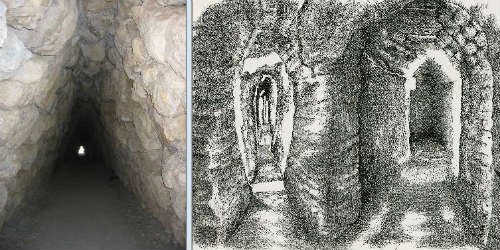 The ‘underground secret passage’ is another form of ley line.  Symbolically it too represents a tunnel. 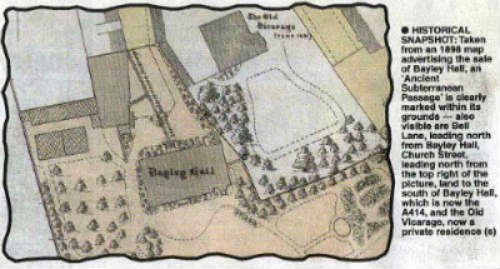 Alfred Watkins – The Old Straight Track
Legends of underground passages between ancient sites such as churches, castles, abbeys and camps are amongst the curiosities of archaeology.  They are so frequent  and persistent that it is unnecessary to give examples.  It has never been my fortune to verify one and other archaeologists have had the same experience.  But it is scarcely safe to say they do not exist.
The distances which those tunnels are supposed to negotiate are often several miles, sometimes down steep hills with a stream below to dive under.  A straight line between the points connected is usually assumed, as it was in one marked on a 1865 map of Hereford of a traditional passage which was supposed to connect the Priory of St Guthlac with their vineyard on the steep bank of the Wye. Strangely enough, this ‘passage’ had fallen in or been dug into on several occasions.  I lived at the spot and saw what appeared to be a small, unlined tunnel crossing the high road at the reputed place … Years later ‘it’ fell in again on the reputed course and a fellow club member and I dug in to investigate.  We found that it was some kind of natural fault or long crevice not man made

When in Shamanic flight, a shaman overflying a region in a spiritual trance ‘sees’ lines as being, if not ‘underground’, at least at ground level or superimposed on the ground.  But we also have evidence collected from other shamanic peoples that occasionally the ‘journey’ is taken underground and not over the ground.

Lewis-Williams and Dowson [1990] South African Archaeological Bulletin
Neuro psychological and ethnographic evidence suggests that San shamans visited the spirit world via a tunnel, that in some instances started at the walls of the rock shelters

Thus an ‘underground passage’ is a spiritual line of force.
Furthermore, fault lines are believed to be a major source of ‘radiation’ and shamans are able to detect these changes in force or power field.  I hesitate to use the word magnetic field or electromagnetic field because I do not think that this is the source, but there is within the earth a capability through fault lines to emit other sources of emissions which shamans are able to see - the most obvious one is the telluric current.

Alfred Watkins – The Old Straight Track
In the folklore of the districk Cnut’s barrow,  lying about midway between the great camp of Danebury and Quarley, 4 miles distant from each other, marks the line of a subterranean way between these great fortresses