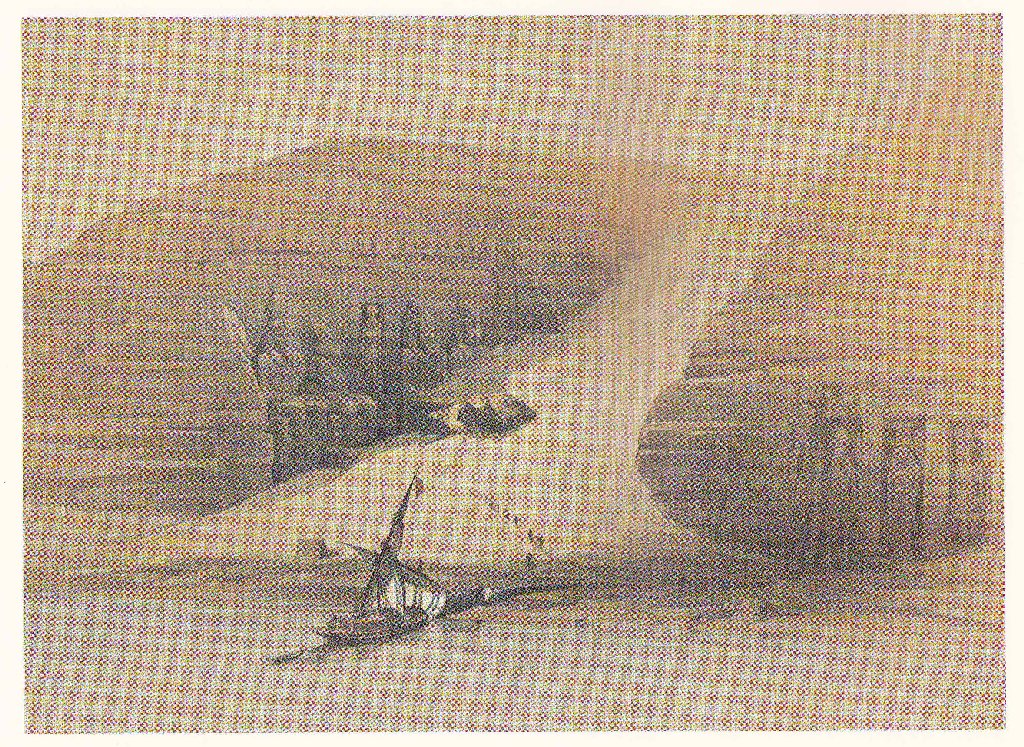 Although many academic text books state that this temple was built to celebrate a victory in battle, the purpose of Abu Symbol appears to have been an alternative form of temple for enacting the first stage of the Mysteries - rebirth.  The hill is tunelled out with numerous crypts and dark passages, all of which would have served as 'burial chambers' in performing the ceremony.

The Abu Simbel temples are two massive rock temples in Abu Simbel (أبو سمبل in Arabic), a small village in Nubia, southern Egypt, near the border with Sudan. They are situated on the western bank of Lake Nasser, about 230 km southwest of Aswan (about 300 km by road). The complex is part of the UNESCO World Heritage Site known as the "Nubian Monuments," which run from Abu Simbel downriver to Philae (near Aswan). The twin temples were originally carved out of the mountainside during the reign of Pharaoh Ramesses II in the 13th century BC, as a lasting monument to himself and his queen Nefertari. However, the complex was relocated in its entirety in 1968, on an artificial hill made from a domed structure, high above the Aswan High Dam reservoir.

The relocation of the temples was necessary to avoid their being submerged during the creation of Lake Nasser, the massive artificial water reservoir formed after the building of the Aswan High Dam on the Nile River.

Construction of the temple complex started in approximately 1264 BC and lasted for about 20 years, until 1244 BC.  It is generally considered the grandest and most beautiful of the temples commissioned during the reign of Rameses II, and one of the most beautiful in Egypt. 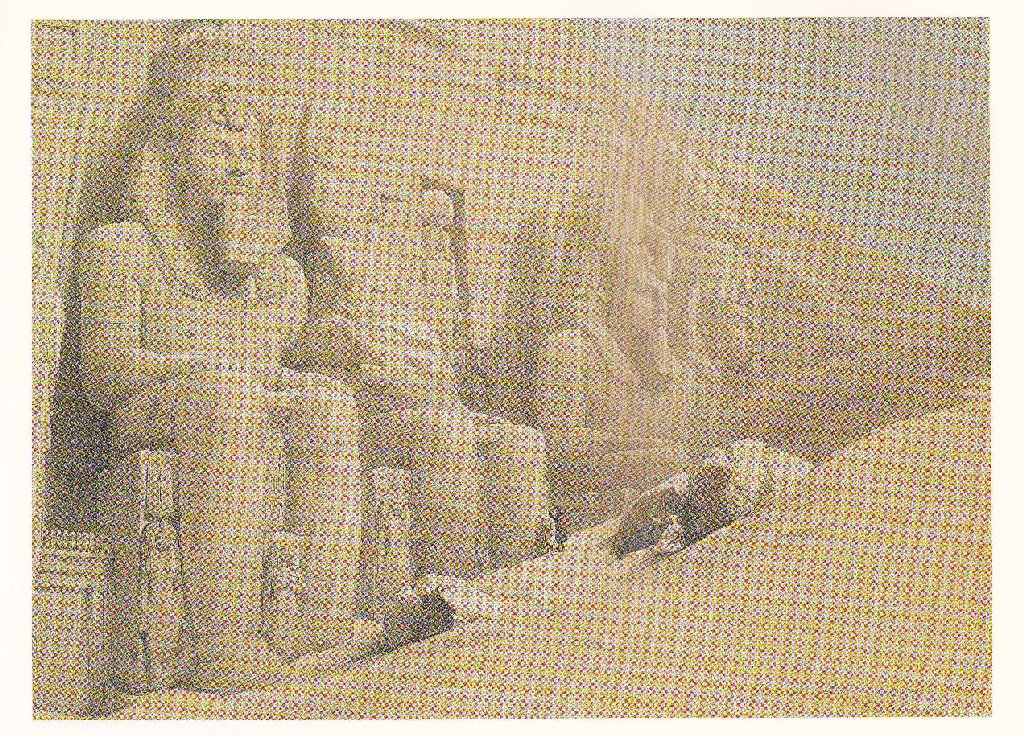 With the passage of time, the temples fell into disuse and eventually became covered by sand. Already in the 6th century BC, the sand covered the statues of the main temple up to their knees. The temple was forgotten until 1813, when Swiss orientalist Jean-Louis Burckhardt found the top frieze of the main temple. Burckhardt talked about his discovery with Italian explorer Giovanni Belzoni, who travelled to the site, but was unable to dig out an entry to the temple. Belzoni returned in 1817, this time succeeding in his attempt to enter the complex. A detailed early description of the temples, together with contemporaneous line drawings, can be found in Edward William Lane's Description of Egypt (1825-1828). 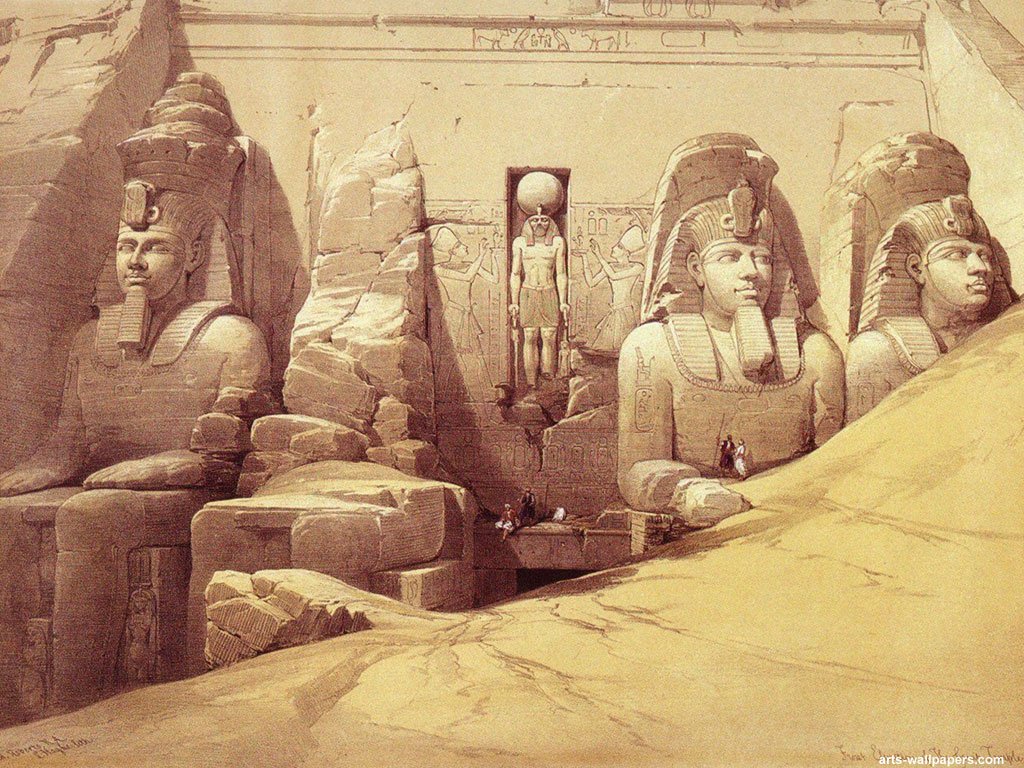 Four colossal 20 meter statues of the pharaoh with the double Atef crown of Upper and Lower Egypt decorate the facade of the temple, which is 35 meters wide and is topped by a frieze with 22 baboons, worshippers of the sun and flank the entrance. The colossal statues were sculptured directly from the rock in which the temple was located before it was moved. All statues represent Ramesses II, seated on a throne and wearing the double crown of Upper and Lower Egypt. The statue to the left of the entrance was damaged in an earthquake, leaving only the lower part of the statue still intact. The head and torso can still be seen at the statue's feet. .... Next to the legs of the colossi, there are other statues no higher than the knees of the pharaoh.

The entrance itself is crowned by a bas-relief representing two images of the king worshipping the falcon-headed Ra Harakhti, whose statue stands in a large niche. This god is holding the hieroglyph “user” and a feather in his right hand, with Ma'at, (the goddess of truth and justice) in his left; this is nothing less than a gigantic cryptogram for Ramesses II's throne name, User-Maat-Re. The facade is topped by a row of 22 baboons, their arms raised in the air, supposedly worshipping the rising sun. Another notable feature of the facade is a stele which records the marriage of Ramesses with a daughter of king Hattusili III, which sealed the peace between Egypt and the Hittites. 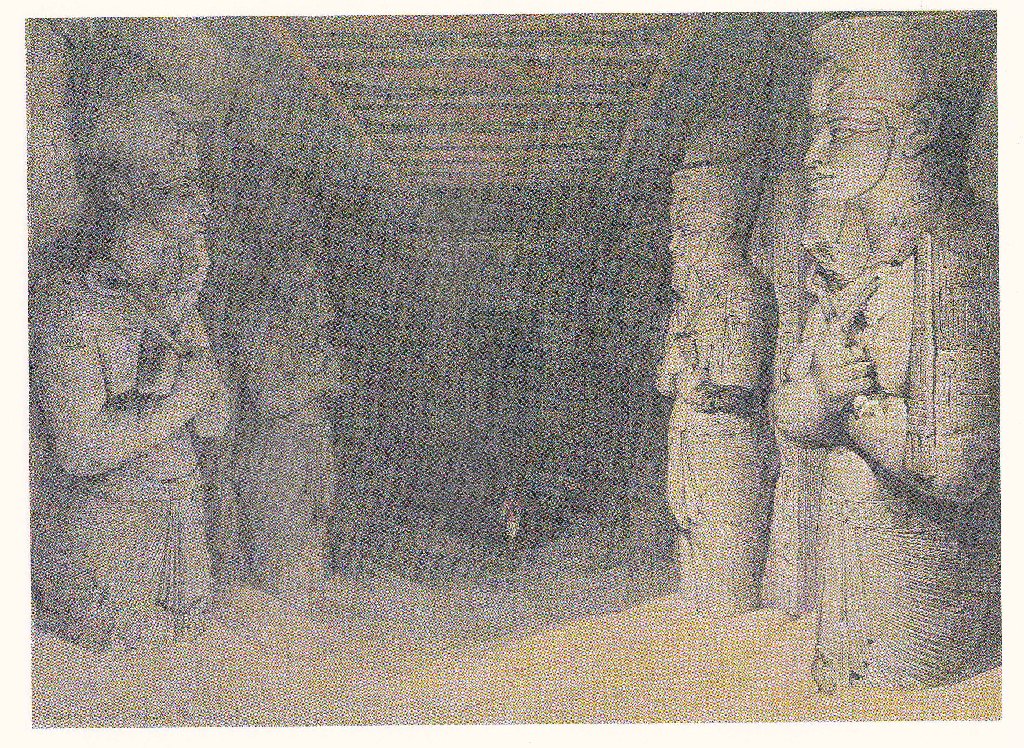 The inner part of the temple has the same triangular layout that most ancient Egyptian temples follow, with rooms decreasing in size from the entrance to the sanctuary. The temple is complex in structure and quite unusual because of its many side chambers. The hypostyle hall (sometimes also called a pronaos) is 18 meters long and 16.7 meters wide and is supported by eight huge Osirid pillars depicting the deified Ramses linked to the god Osiris, the god of the Underworld, .....

From the hypostyle hall, one enters the second pillared hall, which has four pillars decorated with beautiful scenes of offerings to the gods. There are depictions of Ramesses and Nefertari with the sacred boats of Amun and Ra-Harakhti. This hall gives access to a transverse vestibule in the middle of which is the entrance to the sanctuary. Here, on a black wall, are rock cut sculptures of four seated figures: Ra-Horakhty, the deified king Ramesses, and the gods Amun Ra and Ptah. Ra-Horakhty, Amun Ra and Ptah were the main divinities in that period and their cult centers were at Heliopolis, Thebes and Memphis respectively.

It is believed that the axis of the temple was positioned by the ancient Egyptian architects in such a way that on October 22 and February 22, the rays of the sun would penetrate the sanctuary and illuminate the sculptures on the back wall, except for the statue of Ptah, the god connected with the Underworld, who always remained in the dark. People gather at Abu Simbel to witness this remarkable sight, on October 21 and February 21. [This may have been the time of the Mystery celebrations in Abu Simbel]. 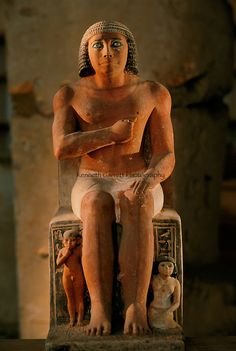 In fact, according to calculations made on the basis of the heliacal rising of the star Sirius (Sothis) and inscriptions found by archaeologists, this date must have been October 22.

Due to the displacement of the temple and/or the accumulated drift of the Tropic of Cancer during the past 3,280 years, it is widely believed that each of these two events has moved one day closer to the Solstice, so they would be occurring on October 22 and February 20 (60 days before and 60 days after the Solstice, respectively).

The NOAA Solar Position Calculator may be used to verify the declination of the Sun for any location on Earth, at any particular date and time. For the latitude of Abu Simbel 22°20′13″N 31°37′32″E, the calculator will yield values close to −11° for both Oct 22 and Feb 20.

The interior of a crypt today 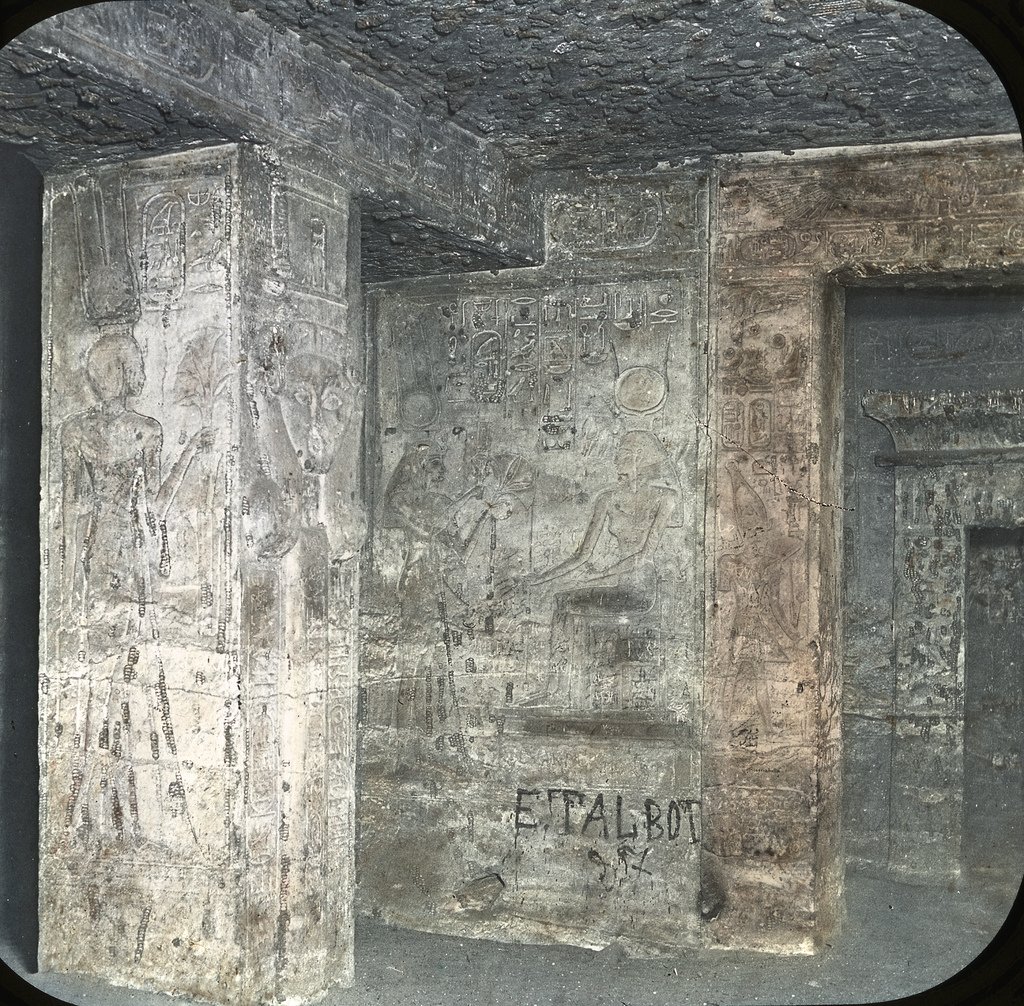