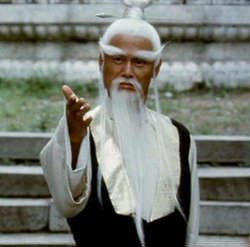 A symbol of wisdom.  It takes some of its symbolism from hair.

In the era when men were regarded as superior to women, and where the old were regarded as those with wisdom, the image used to represent a spiritual being with ‘wisdom’ was an old [often bearded] man.

In Christianity, Jesus is almost always portrayed with a beard in iconography. In paintings and statues most of the Old Testament Biblical characters such as Moses and Abraham and Jesus' New Testament disciples such as St Peter are with beard, as was John the Baptist. Eight of the figures portrayed in the painting entitled The Last Supper by Leonardo da Vinci are bearded.

In India a statue of Brahma – the Creator was often portrayed with a black or white beard denoting wisdom and a longer beard denoting ‘eternal process’. [So here the symbol has some meaning across cultures].  This visionary symbolism spilled over into life and how it was lived.  In ancient India, for example, the beard was allowed to grow long, as a symbol of dignity and of wisdom (cf. sadhu).

Now that women have achieved at least some level of parity with men, we start to find more and more figures of women appearing in descriptions of visions.  But wisdom still seems to be related to age.  As such whether male or female, the figures are nearly always old or at least elderly, with the traits of an elderly person -  white hair, perhaps a wrinkled face, slightly stooped in stature.