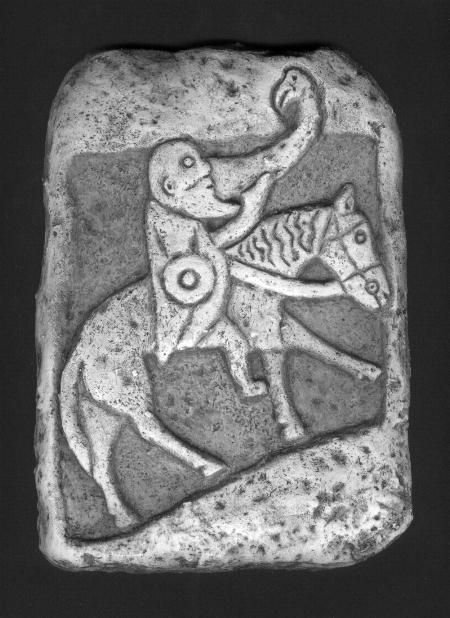 The Bullion Stone is a carved Pictish stone, which is unusual in containing a figure.  It was discovered in 1933 during the construction of a road in Angus, Scotland, and is now located in the Museum of Scotland in Edinburgh. The image on the stone is unique amongst Pictish stones discovered thus far.

It shows an old bearded man on a horse.  A beard is a symbol of wisdom.  It takes some of its symbolism from hair.  The horse is a symbol of spiritual experience as is the symbol of the wide open staring eyes that he has.   [see Lewis chessmen below]. His shield is actually a simplified symbol for the cosmic egg.  We believe he is representative of The Hermit, but he looks a very weary hermit [as they often are].

He is superficially drinking from a very large drinking horn with a bird's head terminal, a parallel that has been noted to the Torrs Horns, also in the museum, of nearly 1,000 years earlier.  The Museum has placed the stone around 900AD, but the Torrs Horns are Iron Age bronze pieces.

Horns have symbolism, as do birds – both associated with the links to the spiritual realm and the ability to ‘hear’.  It may simply mean that this hermit was able to hear celestial music, or interpret bird song.