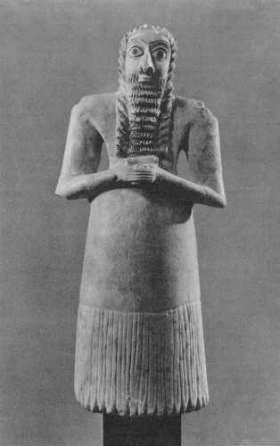 One of the side effects of a spiritual experience can be that the person’s eyes bulge and appear to be staring. It is possible to get both dilated pupils or narrowed pupils.

A spiritual experience can be obtained, as we have seen, with eyes closed or open, any bulging can occur in either case.

In the past this was looked on as the true sign of the mystic – he had ‘gone to the other side’ and what he was seeing was so extraordinary that he was rapt with wonder and his eyes were popping out of his head at the sight.

But this is not the reason for the bulging, the bulging happens whatever the person has ‘seen’. 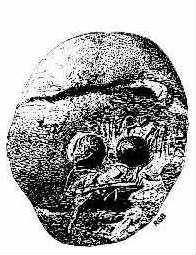 I found this picture on the Internet. It is of a  Makapansgat cobble from South Africa.  The cobble is of a very striking  reddish jasperite and has the natural form of a head, with distinctive ‘staring eyes’ and a ‘mouth’.

Those who found this artefact think that it was deposited in a cave by Australopithecus africanus almost 3 million years ago, which if true indicates that bulging eyes – whether induced by spiritual experience or not  - were a  feature considered ‘special’ enough to record.

The extraordinary find was made in 1925, but remained largely ignored until recently.

Beethoven suffered in the same way when he had one of his manic turns. His companion Schindler used to see  the composer roll his eyes or stare upwards or downwards, eyes bulging, when inspiration struck.  Schindler said that 'These moments of sudden inspiration often would surprise him in the midst of the gayest company or in the street and usually attracted the liveliest attention of all passers by'.  I bet they did. 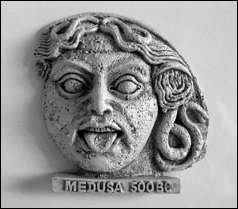 Medusa was a figure of Greek mythology. Anyone meeting her stare was turned into stone. The hero Perseus beheaded her, but to be safe, without looking at her face.  Medusa may have been a real shamaness with extremely advanced powers and therefore extremely frightening to the average person without any of these powers.  Her unpleasantness made her legendary.

In the arts Medusa is pictured with staring eyes, snakes for hair, and her tongue sticking out.

This mask is a copy of the actual mask.  The original mask dates to about 500 B.C. and was found in southern Italy in a town founded by immigrants from Sparta. It is now displayed in the Historical Museum in Oslo.

The pupil size is dependent on the parasympathetic and sympathetic nervous systems, thus this aspect has a physical explanation.

The bulging eyes may have a different medical cause.  The thyroid gland produces hormones that enter the blood stream and regulate the rate of metabolism.  Hormonal output from the thyroid is regulated by thyroid-stimulating hormone (TSH) produced by the anterior pituitary, which itself is regulated by thyrotropin-releasing hormone (TRH) produced by the hypothalamus.

Just as a interesting aside, it is is worth adding that this effect has had a profound effect upon the way we interpret the look of a person.  Because we associate staring eyes or bulging eyes with spiritual experience – probably subconsciously – anyone who adopts this look can appear to be either in raptures or deeply hostile – to be feared.  It should be remembered that those having spiritual experiences many years ago were often people of considerable power and as such they were greatly feared.  A shaman or shamaness  who could, or claimed they could, heal, affect the weather, curse, affect the way animals behaved, change the course of rivers or seas [as Moses could when he parted the Red Sea] was a hugely powerful person – a god in human form.  He or she was a person of terrifying power.

Thus it became natural that those without this power should pretend to have the power by adopting the specific ‘look’ of the spiritually possessed. 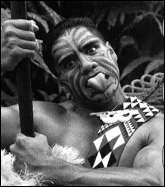 The Maori Haka – used by the New Zealand rugby teams to provide a fairly intimidating display before a match – is but one example of this ‘look’ .  The facial expression is meant to be intimidating but not evil.  Note the similarity with the mask of Medusa…so  the look is meant to say “I am a person of considerable spiritual power who will use it on you”.

There is an even more frightening look which involves the stare – the pseudo bulging eyes  - and a lowered head.

One can only presume that a truly evil shaman or shamaness would have the look of the wide stare and bulging eyes when they were in the trance, but if they decided to do some thing truly evil they would lower their head before issuing the curse or spell or similar.  As I have thankfully never met a truly evil shaman [though they do exist] I cannot verify this I can only surmise this to be the case.

I might add as a form of summary, that over time the bulging of your eyes  does them no good at all.  You start to see endless blurry masses – a sign of retinal break away – floaters as they are called.  After a while it becomes quite difficult to drive or do anything safely.  In the end you can go blind.