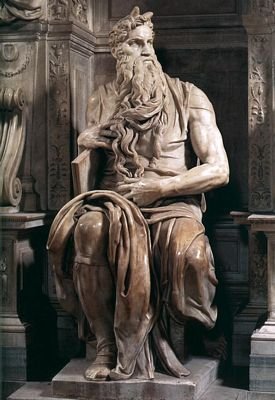 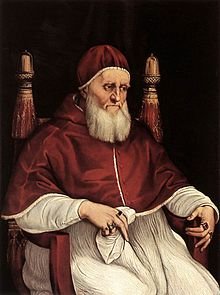 portrait of the Pope by Rafael

In 1505 Michelangelo was invited back to Rome by the newly elected Pope Julius II and commissioned to build the Pope's tomb, which was to include forty statues and be finished in five years. Under the patronage of the pope, Michelangelo experienced constant interruptions to his work on the tomb in order to accomplish numerous other tasks. Although Michelangelo worked on the tomb for 40 years, it was never finished to his satisfaction. It is located in the Church of San Pietro in Vincoli in Rome and is most famous for the central figure of Moses, completed in 1516. Of the other statues intended for the tomb, two, known as the Rebellious Slave and the Dying Slave, are now in the Louvre.

Michelangelo was not actually depcting Moses.

In Greek mythology, satyrs (Ancient Greek: Σάτυροι, Satyroi) are a troop of male companions of Pan and Dionysus …. that roamed the woods and mountains. In mythology they are often associated with pipe playing.

The satyrs' chief was Silenus, a minor deity associated (like Hermes and Priapus) with fertility. These characters can be found in the only remaining satyr play Cyclops by Euripedes and the fragments of Sophocles' The Tracking Satyrs (Ichneutae). ……….. 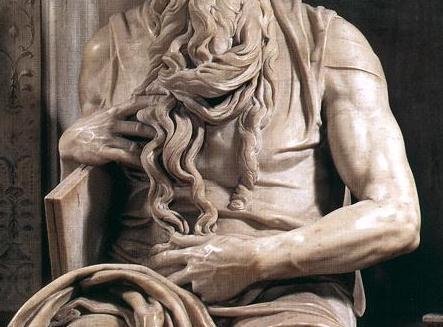 Satyrs acquired their goat-like aspect through later Roman conflation with Faunus, a carefree Italic nature spirit of similar characteristics and identified with the Greek god Pan. Hence satyrs are most commonly described in Latin literature as having the upper half of a man and the lower half of a goat, with a goat's tail in place of the Greek tradition of horse-tailed satyrs; therefore, satyrs became nearly identical with fauns. Mature satyrs are often depicted in Roman art with goat's horns, while juveniles are often shown with bony nubs on their foreheads. 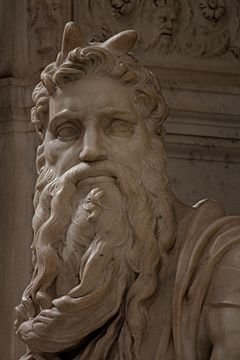 Satyrs are described as roguish but faint-hearted folk — subversive and dangerous, yet shy and cowardly. As Dionysiac creatures they are lovers of wine and women, and they are ready for every physical pleasure. They roam to the music of pipes (auloi), cymbals, castanets, and bagpipes, and they love to dance with the nymphs (with whom they are obsessed, and whom they often pursue), and have a special form of dance called sikinnis. Because of their love of wine, they are often represented holding wine cups, and they appear often in the decorations on wine cups.