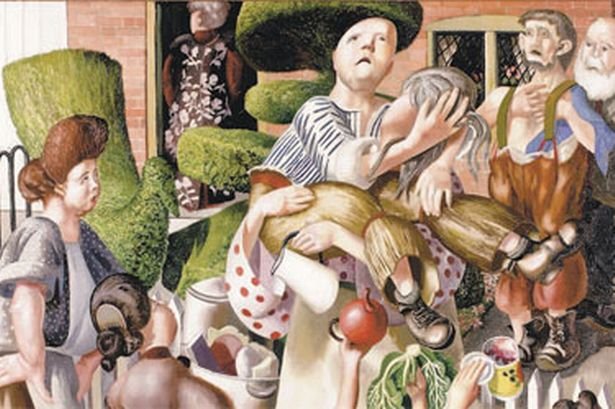 The Lovers (The Dustman), was painted around 1934. He completed the drawing on the 115x125 cm (almost four-feet square) canvas on April 4th, and began painting the next day. It is almost like a ‘Where’s Wally’ of the symbolic.  As the picture we can put on the site can only be small, it is a bit meaningless to list all the symbols, as they can’t be seen, but a selection has been provided. There are quite a few sexual references – slang words made into pictures – that are a joke, not spiritual. There is also a none to complimentary reference to Patricia Preece.  If one had stood outside Lindworth on dustbin day and looked down his line of dustbins, one would have been looking in the direction of Moor Thatch – where Patricia lived with Dorothy. There is just the hint he had a great deal of fun with this and that he is laughing at his serious critics and followers, whilst at the same time continuing his objective of painting every symbol of which he knew ………….

Here is how he saw the painting later in life

I feel, in this Dustman picture, that it is like watching and experiencing the inside of a sexual experience. They are all in a state of anticipation and gratitude to each other. They are each to the other, and all to any one of them, as peaceful as the privacy of a lavatory. I cannot feel anything is Heaven where there is any forced exclusion of any sexual desire...

The picture is to express a joy of life through intimacy. All the signs and tokens of home life, such as the cabbage leaves and teapot which I have so much loved that I have had them resurrected from the dustbin because they are reminders of home life and peace, and are worthy of being adored as the dustman is. I only like to paint what makes me feel happy. As a child I was always looking on rubbish heaps and dustbins with a feeling of wonder. I like to feel that, while in life things like pots and brushes and clothes etc may cease to be used, they will in some way be reinstated, and in this Dustman picture I try to express something of this wish and need I feel for things to be restored. That is the feeling that makes the children take out the broken teapot and empty jam tin.

Dustbins are looking up! Tuesday is the day the dustcart calls, and all the dustbins of each house are placed by their gate or at the edge of the pavement, and I note that everyone has their own ideas about dustbins, just as I have mine..... Well, it appears - as our maid Elsie says when she loses the thread when relating the whole of a cinema story she has just seen - that I became so enamoured of the dustman that I wanted him to be transported to heaven in the execution of his duty --

So [visualizing the composition] I got a big sort of wife to pick him up in her arms while two children in a state of ecstasy  hold up towards him an empty jam tin, a tea-pot and a bit of cabbage-stalk with a few limp leaves attached to it. The scene occurs - people will say "We have seen strange things today"- a little away from the centre of the road in the village and the street goes away in perspective and the dustmen go all up the side of this, so to speak. Now you know my little trouble, and there are two sorts of cryptic things on either side, the left group is a sort of washerwomen onlookers, the right group is the other dustman and a poor old ragged man expecting and hoping for a ride also.

This is all very nice in its way, but some sort of terrible quality has crept in, I do not seem to have got all my beloved self into it somehow, and I am afraid everyone will wonder what it all means, just as I do myself.