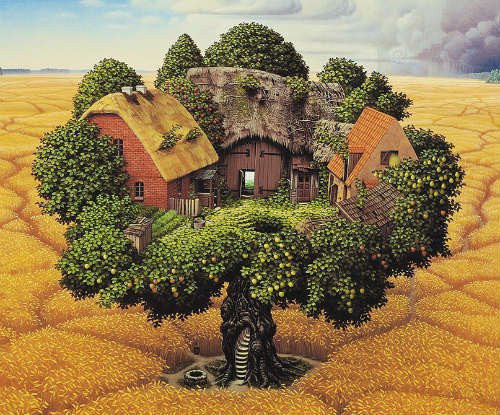 A hedge is a type of barrier or boundary – see barriers and boundaries.

The template of the body is a matrix of cells.  The external boundary of the body is symbolically represented and seen in visions, dreams and so on as a wall  - an impenetrable layer that can only be entered or exited via tunnels and other portals – the chakras.

In contrast the internal cells and organs of the body are divided by symbolic objects that are less solid and include the hedge and the fence.  A hedge is thus one of the more penetrable boundaries between spiritual cells in the matrix of your body.

The term ‘hedge-crosser’, in contrast, refers to someone able to cross from the physical into the spiritual world. In effect, the term hedge becomes just another symbolic alternative to a veil or door or similar.

In Old Europe, the Witch was called "HAEGTESSA", a "Hedge-rider" or hedge-crosser. The image of the "hedge rider" often contained the picture of a man or woman "riding" a hedge and placed them sitting on the hedge, with one leg on the "village" side of the hedge [physical], and the other on the "wild" side [spiritual]. The Witch belonged to both worlds simultaneously as a result of their crossing back and forth.