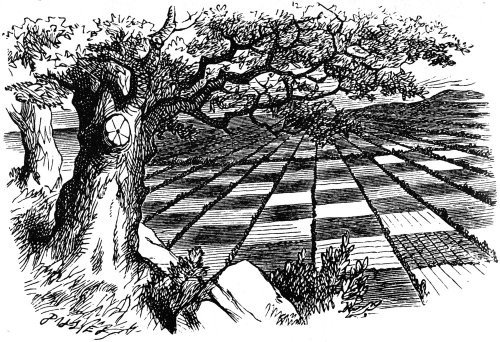 Important passage, a lot of symbols

Alice looked round eagerly, and found that it was the Red Queen. 'She's grown a good deal!' was her first remark. She had indeed: when Alice first found her in the ashes, she had been only three inches high—and here she was, half a head taller than Alice herself!

'It's the fresh air that does it,' said the Rose: 'wonderfully fine air it is, out here.'

'I think I'll go and meet her,' said Alice, for, though the flowers were interesting enough, she felt that it would be far grander to have a talk with a real Queen.

'You can't possibly do that,' said the Rose: ' I  should advise you to walk the other way.'

This sounded nonsense to Alice, so she said nothing, but set off at once towards the Red Queen. To her surprise, she lost sight of her in a moment, and found herself walking in at the front-door again.

A little provoked, she drew back, and after looking everywhere for the queen (whom she spied out at last, a long way off), she thought she would try the plan, this time, of walking in the opposite direction.

It succeeded beautifully. She had not been walking a minute before she found herself face to face with the Red Queen, and full in sight of the hill she had been so long aiming at.

'Where do you come from?' said the Red Queen. 'And where are you going? Look up, speak nicely, and don't twiddle your fingers all the time.'

Alice attended to all these directions, and explained, as well as she could, that she had lost her way.

'I don't know what you mean by YOUR way,' said the Queen: 'all the ways about here belong to ME--but why did you come out here at all?' she added in a kinder tone. 'Curtsey while you're thinking what to say, it saves time.'

Alice wondered a little at this, but she was too much in awe of the Queen to disbelieve it. 'I'll try it when I go home,' she thought to herself, 'the next time I'm a little late for dinner.'

'It's time for you to answer now,' the Queen said, looking at her watch: 'open your mouth a LITTLE wider when you speak, and always say "your Majesty."'

'I only wanted to see what the garden was like, your Majesty--'

'That's right,' said the Queen, patting her on the head, which Alice didn't like at all, 'though, when you say "garden,"--I'VE seen gardens, compared with which this would be a wilderness.'

Alice didn't dare to argue the point, but went on: '--and I thought I'd try and find my way to the top of that hill--'

'When you say "hill,"' the Queen interrupted, ' I could show you hills, in comparison with which you'd call that a valley.'

'No, I shouldn't,' said Alice, surprised into contradicting her at last: 'a hill CAN'T be a valley, you know. That would be nonsense--'

The Red Queen shook her head, 'You may call it "nonsense" if you like,' she said, 'but I'VE heard nonsense, compared with which that would be as sensible as a dictionary!'

Alice curtseyed again, as she was afraid from the Queen's tone that she was a LITTLE offended: and they walked on in silence till they got to the top of the little hill.

For some minutes Alice stood without speaking, looking out in all directions over the country--and a most curious country it was. There were a number of tiny little brooks running straight across it from side to side, and the ground between was divided up into squares by a number of little green hedges, that reached from brook to brook.

'I declare it's marked out just like a large chessboard!' Alice said at last. 'There ought to be some men moving about somewhere--and so there are!' She added in a tone of delight, and her heart began to beat quick with excitement as she went on. 'It's a great huge game of chess that's being played--all over the world--if this IS the world at all, you know.

Oh, what fun it is! How I WISH I was one of them! I wouldn't mind being a Pawn, if only I might join--though of course I should LIKE to be a Queen, best.'

She glanced rather shyly at the real Queen as she said this, but her companion only smiled pleasantly, and said, 'That's easily managed. You can be the White Queen's Pawn, if you like, as Lily's too young to play; and you're in the Second Square to begin with: when you get to the Eighth Square you'll be a Queen--' Just at this moment, somehow or other, they began to run.