The symbolism of the pawn is connected to the game of chess, which is intended to embody a great deal of symbolism regarding the roles within the Great Work as well as the complexity of the ‘game’. 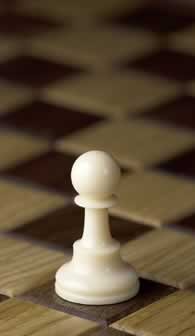 A pawn is related to the minor aracana of the Tarot, in that the pawn is a minor player in the Great Work but has the opportunity with help to be a Queen.

The shape of the pawn and its size is extremely carefully chosen, there is nothing accidental in the way it is depicted.  It represents the soul cone.

The top level is the Aether level with the little Higher spirit.
The next thin layer is the Fire level.
Then we have the Air level – the slimmer tapering part, broadening out to the Water level.
This then further broadens to the Earth level and from there a ridge indicating other levels of earth – the Underworld and Hell.
Chess is thus an allegory of the spiritual ascent – the spiritual path, the search by the pawn of the role of Queen.