There are two main themes here plus a lot of symbols.

One is the use of automatic writing and the other the concept of perceptions being a record of events. 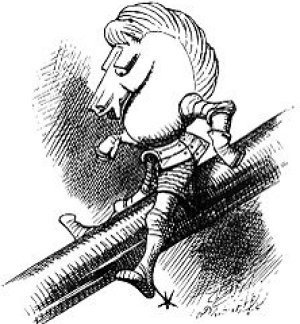 The very first thing she did was to look whether there was a fire in the fireplace, and she was quite pleased to find that there was a real one, blazing away as brightly as the one she had left behind. 'So I shall be as warm here as I was in the old room,' thought Alice: 'warmer, in fact, because there'll be no one here to scold me away from the fire. Oh, what fun it'll be, when they see me through the glass in here, and can't get at me!'

Then she began looking about, and noticed that what could be seen from the old room was quite common and uninteresting, but that all the rest was as different as possible. For instance, the pictures on the wall next the fire seemed to be all alive, and the very clock on the chimney-piece (you know you can only see the back of it in the Looking-glass) had got the face of a little old man, and grinned at her.

'They don't keep this room so tidy as the other,' Alice thought to herself, as she noticed several of the chessmen down in the hearth among the cinders: but in another moment, with a little 'Oh!' of surprise, she was down on her hands and knees watching them. The chessmen were walking about, two and two!

'Here are the Red King and the Red Queen,' Alice said (in a whisper, for fear of frightening them), 'and there are the White King and the White Queen sitting on the edge of the shovel--and here are two castles walking arm in arm--I don't think they can hear me,' she went on, as she put her head closer down, 'and I'm nearly sure they can't see me. I feel somehow as if I were invisible--'

Here something began squeaking on the table behind Alice, and made her turn her head just in time to see one of the White Pawns roll over and begin kicking: she watched it with great curiosity to see what would happen next.

'It is the voice of my child!' the White Queen cried out as she rushed past the King, so violently that she knocked him over among the cinders. 'My precious Lily! My imperial kitten!' and she began scrambling wildly up the side of the fender.

'Imperial fiddlestick!' said the King, rubbing his nose, which had been hurt by the fall. He had a right to be a LITTLE annoyed with the Queen, for he was covered with ashes from head to foot.

Alice was very anxious to be of use, and, as the poor little Lily was nearly screaming herself into a fit, she hastily picked up the Queen and set her on the table by the side of her noisy little daughter.

The Queen gasped, and sat down: the rapid journey through the air had quite taken away her breath and for a minute or two she could do nothing but hug the little Lily in silence. As soon as she had recovered her breath a little, she called out to the White King, who was sitting sulkily among the ashes, 'Mind the volcano!'

'What volcano?' said the King, looking up anxiously into the fire, as if he thought that was the most likely place to find one.

'Blew--me--up,' panted the Queen, who was still a little out of breath. 'Mind you come up--the regular way--don't get blown up!'

Alice watched the White King as he slowly struggled up from bar to bar, till at last she said, 'Why, you'll be hours and hours getting to the table, at that rate. I'd far better help you, hadn't I?' But the King took no notice of the question: it was quite clear that he could neither hear her nor see her.

So Alice picked him up very gently, and lifted him across more slowly than she had lifted the Queen, that she mightn't take his breath away: but, before she put him on the table, she thought she might as well dust him a little, he was so covered with ashes.

She said afterwards that she had never seen in all her life such a face as the King made, when he found himself held in the air by an invisible hand, and being dusted: he was far too much astonished to cry out, but his eyes and his mouth went on getting larger and larger, and rounder and rounder, till her hand shook so with laughing that she nearly let him drop upon the floor.

'Oh! PLEASE don't make such faces, my dear!' she cried out, quite forgetting that the King couldn't hear her. 'You make me laugh so that I can hardly hold you! And don't keep your mouth so wide open! All the ashes will get into it--there, now I think you're tidy enough!' she added, as she smoothed his hair, and set him upon the table near the Queen.

The King immediately fell flat on his back, and lay perfectly still: and Alice was a little alarmed at what she had done, and went round the room to see if she could find any water to throw over him. However, she could find nothing but a bottle of ink, and when she got back with it she found he had recovered, and he and the Queen were talking together in a frightened whisper--so low, that Alice could hardly hear what they said.

The King was saying, 'I assure, you my dear, I turned cold to the very ends of my whiskers!'

To which the Queen replied, 'You haven't got any whiskers.'

'The horror of that moment,' the King went on, 'I shall never, NEVER forget!'

'You will, though,' the Queen said, 'if you don't make a memorandum of it.'

Alice looked on with great interest as the King took an enormous memorandum-book out of his pocket, and began writing. A sudden thought struck her, and she took hold of the end of the pencil, which came some way over his shoulder, and began writing for him.

The poor King looked puzzled and unhappy, and struggled with the pencil for some time without saying anything; but Alice was too strong for him, and at last he panted out, 'My dear! I really MUST get a thinner pencil. I can't manage this one a bit; it writes all manner of things that I don't intend--'

'What manner of things?' said the Queen, looking over the book (in which Alice had put 'THE WHITE KNIGHT IS SLIDING DOWN THE POKER. HE BALANCES VERY BADLY') 'That's not a memorandum of YOUR feelings!'