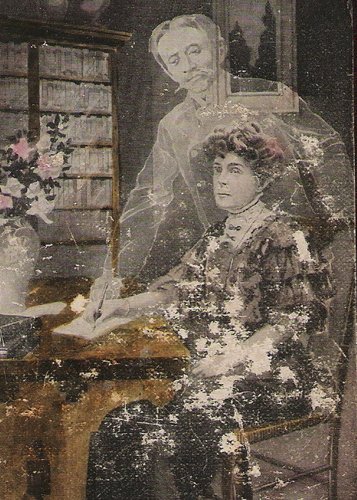 Automatic writing or psychography is writing produced whilst in a trance or semi-hypnotised condition, in which the person does not control the writing implement or its movement across the paper – either because they are not conscious or are only semi-conscious.

The words may be legible or not.  Hélène Smith, for example, was able to perform automatic writing whilst in a semi-trance, but the result was meaningless.  Théodore Flouroy described her actions in From India to the Planet Mars. Thus the automatic writing ability was real, but where the end result came from was a mystery - she decided that the writing must be "Martian" in origin.

Théodore Flournoy was a Psychology professor, and concluded that her "Martian" language had a strong resemblance to Ms. Smith's native language of French and that her automatic writing was "romances of the subliminal imagination, derived largely from forgotten sources (for example, books read as a child)." But why dismiss this?  This is where stories, poems and buried perceptions are found – a whole realm of creativity may be aroused via this method, as such Professor Flournoy was being, shall we say, a little premature in poo-pooing an approach that could have enormous potential use.

George Hyde-Lees, on the other hand – or Georgie - the wife of William Butler Yeats could write automatically and everything written made sense.  She went into a semi-trance state too.

The automatic writing of Ms Smith

Automatic writing was reported by Hyppolyte Taine in the preface to the third edition of his "De l'intelligence", published in 1878. And when Fernando Pessoa described what it was like to write automatically he said that he felt "owned by something else", sometimes feeling a sensation in the right arm which he claimed was lifted into the air without his will.

The existence of writing automatically in trance and semi-trance states is thus real, but the question then is – where does the information come from?

Arthur Conan Doyle in his book The New Revelation (1918) wrote that he believed automatic writing occurs either by the writer's subconscious or by external spirits operating through the writer. The Surrealist poet Robert Desnos claimed he was among the most gifted in automatic writing – his poems derive from this approach and he put it all down to external agents providing him with the inspiration.

Generally speaking automatic writing “may take place by the writer passively holding a pencil or pen on a sheet of paper”.

The action is not the same as that when using a planchette, or a 'ouija board'.  In these cases more than one person may be needed to get the pointer used to move.  For reasons we are unable to fathom, both these latter methods also seem to attract the more unsavoury spirits, who not only do not tell the truth, but do their level best to upset the participants.