Yeats, Georgie - A Vision - The Phases of the Moon

The wheel described by Yeats's Instructors was 'The Great Wheel' as they called it – the Wheel representing the Challenge as opposed to each of the sub-tasks and possible reincarnations.  In the Instructors' system the wheel was divided into phases of the moon.  The symbolic phases are shown below.  Remember that this is not a life – this is the entire challenge broken down symbolically into types of sub-task:

A Great wheel can take as much as 2,000 years to complete and there is even a Great Great wheel estimated to be in the region of 26,000 years, but the important thing to remember is that there are any number of these Great wheels, all of which slot into a greater wheel and a yet greater wheel and so on.  This is the ultimate project plan, with vast complexity and no real limits in the time taken for each task, only that they have a dependency and one task cannot start before another task is completed.  So this is not a time based plan it is a dependency based plan. 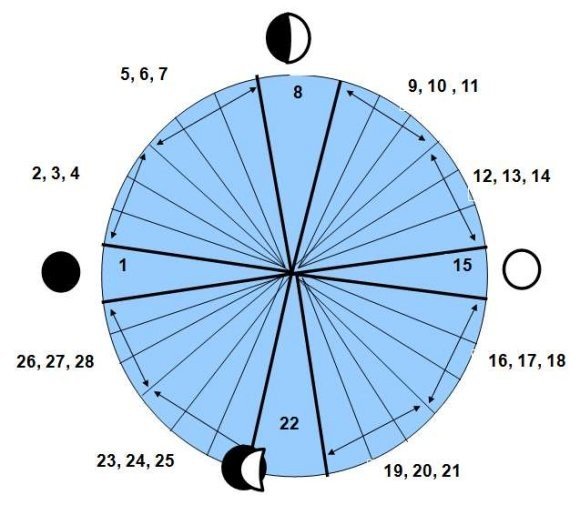 W B Yeats – A Vision - A Great Wheel of twenty eight incarnations is considered to take, if no failure compels repetition of a phase, some two thousand odd years and twelve such wheels or gyres constitute a single great cone or year of some twenty six thousand years.  But these twenty six thousand years are but a norm, a convenient measure, much may shorten or lengthen the whole or some part of the whole.

W B Yeats – A Vision

Twenty and eight the phases of the moon,
The full and the moon's dark and all the crescents
Twenty and eight, and yet but six and twenty
The cradles that a man must needs be rocked in;
For there's no human life at the full or the dark
From the first crescent to the half, the dream
But summons to adventure and the man
Is always happy like a bird or a beast;
But while the moon is rounding towards the full
He follows whatever whim's most difficult
Among whims not impossible, and though scarred
As with the cat-o'-nine-tails of the mind
His body moulded from within his body
Grows comelier.  Eleven pass, and then
Athene takes Achilles by the hair
Hector is in the dust, Nietzsche is born
Because the hero's crescent is in the twelfth.
And yet, twice born, twice buried, grow he must
Before the full moon, helpless as a worm
The thirteenth moon but sets the soul at war
In its own being, and when that war's begun
There is no muscle in the arm; and after
Under the frenzy of the fourteenth moon
The soul begins to tremble into stillness
To die into the labyrinth of itself
….............
And after that the crumbling of the moon
The soul remembering its loneliness
Shudders in many cradles; all is changed
It would be the world's servant, and as it serves
Choosing whatever task's most difficult
Among tasks not impossible, it takes
Upon the body and upon the soul
The coarseness of the drudge
...............................

And what of those
That the last servile crescent has set free?
Because all dark, like those that are all light
They are cast beyond the verge and in a cloud
Crying to one another like the bats
But having no desire they cannot tell
What's good or bad, or what it is to triumph
At the perfection of one's own obedience
And yet they speak what's blown into the mind
Deformed beyond deformity, unformed
Insipid as the dough before it is baked
They change their bodies at a word

Challenge
Great Work, the
Hero
Hero - the quest
Heroes in story, myth and legend
Increments of evolution
Mansions of the Moon
Reincarnation

Hermit, the
Phases of the moon
Wheel