Mansions of the Moon

For this purpose, the Moon's own psuedo-zodiac was designed based on her position in relation to notable star groupings. 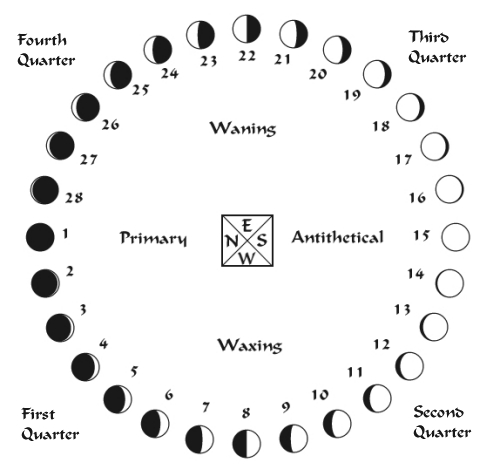 These are the 28 Lunar Mansions and observances and recordings of the Moon through these places appear in several cultures including the Middle East, India, and China.

On the right we see the diagram W B Yeats was given in the Vision.

The Lunar Mansions are determined by the position of the Moon as she circles the Earth.  Taking her average motion of 12° 51' and 26" and dividing that by the 360°s of the zodiac, we arrive at the 28 distinct positions the Moon can occupy in the sky on any given night.

The Arabic word for the Mansions is "manzil"منازل meaning "house" and these positions were conceptualized as places where the Moon rested for the night. The Chinese name for the Mansions 二十八宿 (Èr shí bā xiù) ​better illustrates this with the word xiù (宿) meaning something more like a place one finds lodging for the night, almost like a motel room you would stay in on your way to some other location.

As a central time keeping device, the lunar mansions were popularly used in astrology and magic with each Mansion having its own traits, characteristics, and effects as well as assigned images (reminiscent of Decanic image magic from Egypt), spirits, and suffamigations.
​