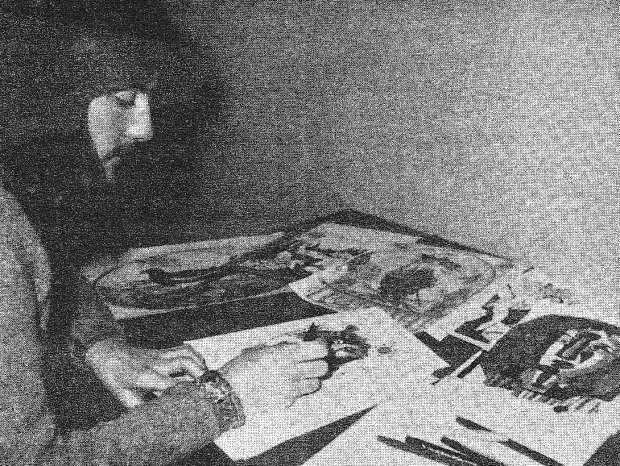 After his experiments with automatic writing, Matthew then went on to undertake a series of experiments in automatic drawing.  The drawings all purported to be from famous painters and were indeed all in the style of famous painters.  But when you look at the drawings it is almost as if Matthew played back the activity of an artist.  In effect he was the mechanism of an action replay, down to the crossings out and the frustration.  It is almost as if he had tapped in to the perceptions of an artist and then rerun that perception, like playing a movie film through a camera, where he was the camera.  There were well known drawings and unknown drawings, but of course we do not know whether these were just the ones the artist threw away.  This is what he says

The drawings that I produced caused more and more questions to be asked about their origin and how I managed to draw them, especially as it was well known that I had never possessed any ability to draw or paint. ….. many of the drawings were "anonymous", but there were so many different styles expressed in the drawings that this in itself was quite baffling.

By late 1971 I had drawings in the styles of Walt Disney, Bewick, early European woodcutters, and early twentieth century French artists. Similar themes and features could be found in many of the drawings, but they were all translated into the particular style of different artists.

A large proportion of the drawings seemed to feature dead branches and hard stone surfaces, giving them a somewhat sinister appearance.

An owl drawn with my fountain pen, and purporting to be drawn by Thomas Bewick, was attractively executed and then set in a back-ground of protruding dead branches of a tree.  The bird itself perched on a stone, displaying large talons and a preying beak.

A psychic researcher wrote to me after studying the drawings and observing me closely on many occasions:

"The physical instigator of these drawings is your hand, but further than that I cannot venture with a like degree of certainty. The inspiration-for want of a better word-seems to come from somewhere outside your consciousness. This conclusion is I feel substantiated by the quality of your drawings. Whilst some of these are reproductions of pieces previously done by the artist in his lifetime, several appear to never have been produced before . . ."

I have already mentioned that it was the sheer volume of automatic drawings which appeared to impress people most, and, I believe, the wide spectrum of artists who-purport to execute these drawings through my hand. I deliberately tried to "tune in" with as many different artists as possible. I did not necessarily do so by asking a particular artist whose name I knew, and often I only discovered the identity when the signature "appeared".