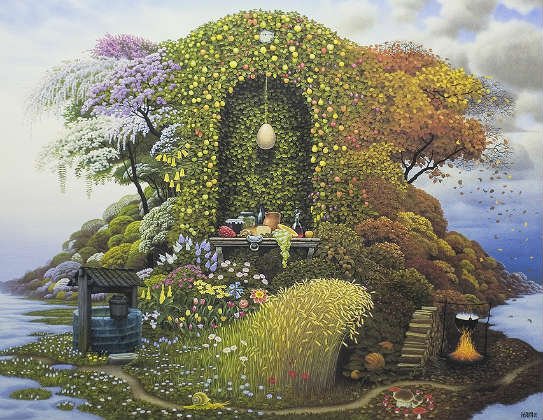 The garden is yet another Cell in the Matrix.

The garden represents the Soul. It is the symbol of the combination of the Conscious self and the Subconscious self. We can see it in visions, but the gardens we ourselves create also say a lot about our state of mind – so the spiritual and physical are both very telling.

It can represent ‘nature subdued’ or more correctly the subconscious subdued – or it can represent nature used and enhanced – in this case the Subconscious has not been suppressed, but given an equal place  – the beauty in nature is brought out.

A garden  contrasts with the forest which represents the deep Subconscious. The more instinctive almost reptilean mind.  Untameable.

Because one of the fundamental goals of all spiritual  paths is to merge the Conscious with the Subconscious mind, in a 'marriage' of equals – a balance - the garden is a fairly potent symbol of where one has reached on this path.  The objective is not to subdue nature – not to crush the child within us, but to give it equal status.  Thus any garden you see that is formal strict regimented neat, tidy but lacking in any sense of beauty or softness is not a good thing.

The garden is symbolically the place for  ‘treasure hunts’.

Whereas a maze represents only Memory, the garden is the sum total of all the functions of the mind  – Will, Reason, Desires and Obligations, Memory recall, the Personality , the Imagination and Creative spirit as well Emotions , Perceptions and so on,  so it can be quite complex in its symbolism.

It also lends itself well to such complex symbolism, as there are any number of aspects of a garden that can be used – walls, plants, paths, layout, colour.  It is, therefore, ideally placed to provide you with an at a glance idea of the state of the soul – formal, rigid, neat organised Disciplined and Intellectual ! or informal, with windings paths and secret spaces, blowsy, soft, and sensuous – emotional!

Every aspect of a garden is symbolic, the trees, the layout, the flowers, the state of  ‘repair’, the tools and equipment, the walls, the buildings in it and so on.  So you have to take especial note in a vision and miss nothing, note every feature, it all counts.  Flowers have their own symbolism as does fruit.

The state of the garden you are faced with – the summary of your life, need not be a reflection of your inability to act, but a reflection of the system within which you have had to live.  William Blake’s poem is superb in this respect, I have placed it here rather than as an observation because it is worth savouring in context – repression! …….

And I saw it was filled with graves
And tomb stones where flowers should be
And Priest in black gowns, were walking their rounds
And binding with briars, my joys and desires

A garden is a reflection of your hopes and wishes, your frustrations,  the things you have done, the things you have achieved, the sort of life you have led.  It is a sort of summary of you, as such it can be a happy joyous place full of trees and flowers;  or wholly wasteland, with the flowers withered, weeds growing along the paths and an air of decay and hopelessness about it. 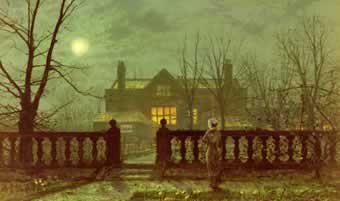 If you have achieved little, feel you have wasted your life, have led a desperate and unhappy life or your memory of life is not joyous, the garden you will be presented with in a vision [or the one outside your door!] may be a sad remnant of what it could have been.
We may be able to detect past glories – flowers which have withered but were glorious in their day, memories to be treasured even if they are over.  We may once have been able to see our way forward, the paths may once have been clear and well tended, but over time the paths may have become clogged with weeds and our way forward unclear.
A garden once left to stagnate becomes overgrown and unkempt, much as a life that is not lived to the full becomes a weary one. 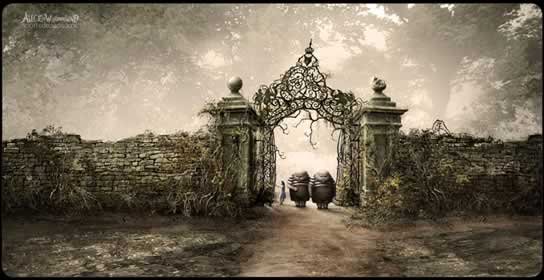 One could, of course, get deeply upset at having a dream or some drug induced trip late in your life, which shows you some unkempt untidy rambling plot with the odd straggly rose and unkempt path, with weedy beds and rusty garden furniture, tools unused and greenhouses smashed and empty.  But that is what life often is ……….
By the time you get to a certain age, the flowers are gone, the weeds may be growing, but how big is your garden and are there signs it was once a place of pure pleasure?
It may be autumn in you garden but autumn can be a beautiful time.
Aaah and the fruit – what about the fruit? 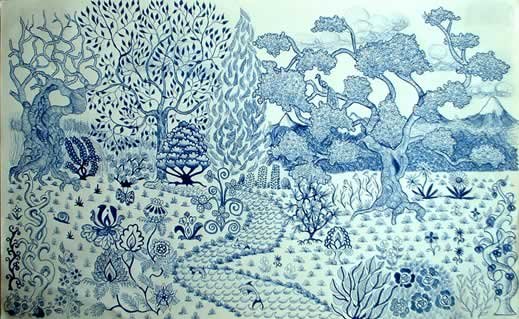 The young and perhaps content may well see in dreams and visions the most beautiful gardens, if their lives are happy and fulfilled.  Remember, however, that life’s garden is always changing, so it is simply a reflection of the state of your life up to then.
Gardens can appear at  any level and layer not just ‘earth’ level or in the ‘air’.  There are water gardens for example.  The level appears to be indicative of the stage reached on the spiritual path.  The higher your garden, the better placed it is despite its apparent internal condition.  The level thus shows the potential, the inside shows more of the current actuality
It should now be clear now why Shaikh Kirmani  states that ‘That is why the Paradise of each of us is in the Heaven of his being’; the garden of Eden and any other garden we see is a construct of our souls whilst we are living, after death there is no garden.