Around 1796, Coleridge started taking laudunum as a pain-reliever. His suffering, caused by many ailments, including toothache and facial neuralgia, is mentioned in his own notebook as well as that of Dorothy Wordsworth.  He was addicted for much of his adult life

In the summer of 1797, Samuel Taylor Coleridge was in Exmoor.  He was ill and was given ‘anodyne’ the trade name for laudanum.  He fell asleep in his chair whilst reading about Kubla Khan in Purchas’s Pilgrimage.

Afterwards ‘images rose up before him’.  On awakening he had a distinct recollection of the whole and he took pen and paper and wrote down the lines of Kubla Khan that we know.

Before he had finished, however, [and he estimated he remembered 200 to 300 lines] he was interrupted by a person on business [who some have said was his laudanum supplier] who kept him in conversation for over an hour.  Afterwards he found that ‘though he still retained some vague and dim recollections of the general purport of the vision yet with the exception of some 8 or 10 scattered lines and images all the rest had passed away’. 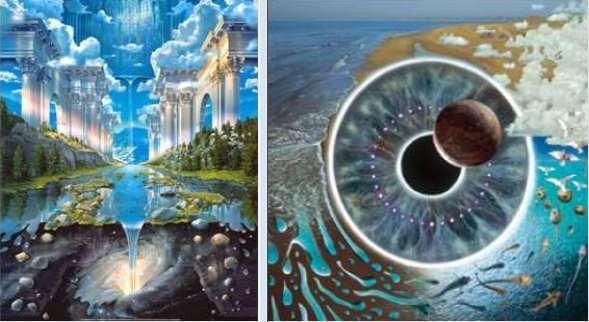 In Xanadu did Kubla Khan
A stately pleasure dome decree;
Where Alph, the sacred river, ran
Through caverns measureless to man
Down to a sunless sea

So twice five miles of fertile ground
With walls and towers were girdled round
And there were gardens bright with sinuous rills
Where blossomed many an incense bearing tree
And here were forests ancient as the hills,
Enfolding sunny spots of greenery.

But oh! That deep romantic chasm which slanted
Down the green hill athwart a cedarn cover!
A savage place!  As holy and enchanted
As e'er beneath a waning moon was haunted
By woman wailing for her demon lover!
And from this chasm, with ceaseless turmoil seething
As if this earth in fast thick pants were breathing,
A mighty fountain momently was forced:
Amid whose fragments vaulted like rebounding hail
Or chaffy grain beneath the thresher's flail:
And mid these dancing rocks at once and ever
It flung up momently the sacred river.
Five miles meandering with a mazy motion
Through wood and dale the sacred river ran,
Then reached the caverns measureless to man,
And sank in tumult to a lifeless ocean:
And mid this tumult Kubla heard from far
Ancestral voices prophesying war!

The shadow of the dome of pleasure
Floated midway on the waves;
Where was heard the mingled measure
From the fountain and the caves.
It was a miracle of rare device,
A sunny pleasure dome with caves of ice!

Then all the charm
Is broken – all that phantom world so fair
Vanishes, and a thousand circlets spread,
And each mis-shape the other.  Stay awhile,
Poor youth! Who scarcely dar'st lift up thine eyes
The stream will soon renew its smoothness, soon
The visions will return! And lo! He stays,
And soon the fragments dim of lovely forms
Come trembling back, unite, and now once more
The pool becomes a mirror