A masterpiece of hidden symbolism - nonsense of course because the objective was to hide the symbols in the verse. 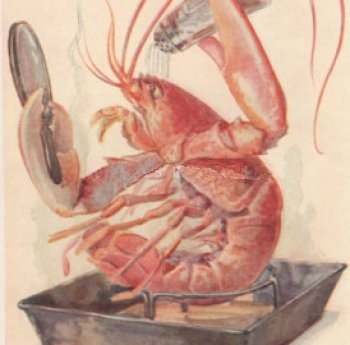 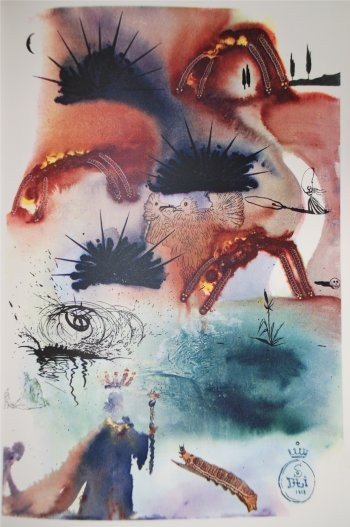 So Alice began telling them her adventures from the time when she first saw the White Rabbit. She was a little nervous about it just at first,the two creatures got so close to her, one on each side, and opened their eyes and mouths so VERY wide, but she gained courage as she went on. Her listeners were perfectly quiet till she got to the part about her repeating 'YOU ARE OLD, FATHER WILLIAM,' to the Caterpillar, and the words all coming different, and then the Mock Turtle drew a long breath, and said 'That's very curious.'

'It's all about as curious as it can be,' said the Gryphon.

'It all came different!' the Mock Turtle repeated thoughtfully. 'I should like to hear her try and repeat something now. Tell her to begin.' He looked at the Gryphon as if he thought it had some kind of authority over Alice.

'Stand up and repeat "'TIS THE VOICE OF THE SLUGGARD,"' said the Gryphon.

'How the creatures order one about, and make one repeat lessons!' thought Alice; 'I might as well be at school at once.' However, she got up, and began to repeat it, but her head was so full of the Lobster Quadrille, that she hardly knew what she was saying, and the words came very queer indeed:--

''Tis the voice of the Lobster; I heard him declare,
"You have baked me too brown, I must sugar my hair."
As a duck with its eyelids, so he with his nose
Trims his belt and his buttons, and turns out his toes.'
When the sands are all dry, he is gay as a lark,
And will talk in contemptuous tones of the Shark,
But, when the tide rises and sharks are around,
His voice has a timid and tremulous sound.

'That's different from what I used to say when I was a child,' said the Gryphon.

'Well, I never heard it before,' said the Mock Turtle; 'but it sounds uncommon nonsense.'

Alice said nothing; she had sat down with her face in her hands, wondering if anything would EVER happen in a natural way again.

'I should like to have it explained,' said the Mock Turtle.

'She can't explain it,' said the Gryphon hastily. 'Go on with the next verse.'

'But about his toes?' the Mock Turtle persisted. 'How COULD he turn them out with his nose, you know?'

'It's the first position in dancing.' Alice said; but was dreadfully puzzled by the whole thing, and longed to change the subject.

'Go on with the next verse,' the Gryphon repeated impatiently: 'it begins "I passed by his garden."'

Alice did not dare to disobey, though she felt sure it would all come wrong, and she went on in a trembling voice:--

'I passed by his garden, and marked, with one eye,
How the Owl and the Panther were sharing a pie--'
The Panther took pie-crust, and gravy, and meat,
While the Owl had the dish as its share of the treat.
When the pie was all finished, the Owl, as a boon,
Was kindly permitted to pocket the spoon:
While the Panther received knife and fork with a growl,
And concluded the banquet--]

'What IS the use of repeating all that stuff,' the Mock Turtle interrupted, 'if you don't explain it as you go on? It's by far the most confusing thing I ever heard!'

'Yes, I think you'd better leave off,' said the Gryphon: and Alice was only too glad to do so.