A dish or a plate is a symbol of having been Beheaded. The symbolism derives from the story of John the Baptist in the Bible [see below].  By being able to divorce the lower half of your body you deprive your mind of the sensations coming from it and thereby are more able to have a spiritual experience.

The platter used in the Holy Grail story is an allegory of Beheading. 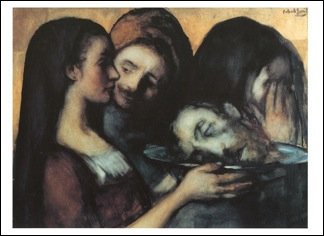 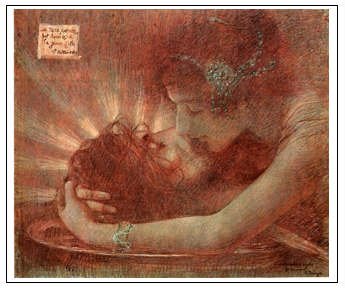 14 Now King Herod heard of Him, for His name had become well known. And he said, “John the Baptist is risen from the dead, and therefore these powers are at work in him.”

16 But when Herod heard, he said, “This is John, whom I beheaded; he has been raised from the dead!”

17 For Herod himself had sent and laid hold of John, and bound him in prison for the sake of Herodias, his brother Philip’s wife; for he had married her.

18 Because John had said to Herod, “It is not lawful for you to have your brother’s wife.”

19 Therefore Herodias held it against him and wanted to kill him, but she could not;

20 for Herod feared John, knowing that he was a just and holy man, and he protected him. And when he heard him, he did many things, and heard him gladly.

21 Then an opportune day came when Herod on his birthday gave a feast for his nobles, the high officers, and the chief men of Galilee.

22 And when Herodias’ daughter herself came in and danced, and pleased Herod and those who sat with him, the king said to the girl, “Ask me whatever you want, and I will give it to you.”

23 He also swore to her, “Whatever you ask me, I will give you, up to half my kingdom.”

24 So she went out and said to her mother, “What shall I ask?”
And she said, “The head of John the Baptist!”

25 Immediately she came in with haste to the king and asked, saying, “I want you to give me at once the head of John the Baptist on a platter.”