The entire observation is about learning how to get spiritual experience, balancing the energy flows so that you don't fall down again from off your 'horse'.

I have put the reference to kundalini in, not because this is a kundalini excperience, but so that it is clear which energy flows he was attempting to balance. 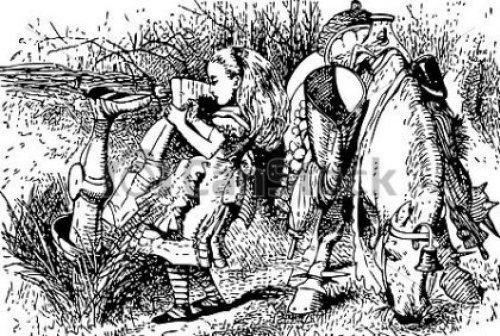 Alice through the Lookimg Glass

This took a very long time to manage, though Alice held the bag open very carefully, because the Knight was so VERY awkward in putting in the dish: the first two or three times that he tried he fell in himself instead. 'It's rather a tight fit, you see,' he said, as they got it in a last; 'There are so many candlesticks in the bag.' And he hung it to the saddle, which was already loaded with bunches of carrots, and fire-irons, and many other things.

'I hope you've got your hair well fastened on?' he continued, as they set off.

'Only in the usual way,' Alice said, smiling.

'That's hardly enough,' he said, anxiously. 'You see the wind is so VERY strong here. It's as strong as soup.'

'Have you invented a plan for keeping the hair from being blown off?' Alice enquired.

'Not yet,' said the Knight. 'But I've got a plan for keeping it from FALLING off.'

'First you take an upright stick,' said the Knight. 'Then you make your hair creep up it, like a fruit-tree. Now the reason hair falls off is because it hangs DOWN--things never fall UPWARDS, you know. It's a plan of my own invention. You may try it if you like.'

It didn't sound a comfortable plan, Alice thought, and for a few minutes she walked on in silence, puzzling over the idea, and every now and then stopping to help the poor Knight, who certainly was NOT a good rider.

Whenever the horse stopped (which it did very often), he fell off in front; and whenever it went on again (which it generally did rather suddenly), he fell off behind. Otherwise he kept on pretty well, except that he had a habit of now and then falling off sideways; and as he generally did this on the side on which Alice was walking, she soon found that it was the best plan not to walk QUITE close to the horse.

'I'm afraid you've not had much practice in riding,' she ventured to say, as she was helping him up from his fifth tumble.

The Knight looked very much surprised, and a little offended at the remark. 'What makes you say that?' he asked, as he scrambled back into the saddle, keeping hold of Alice's hair with one hand, to save himself from falling over on the other side.

'Because people don't fall off quite so often, when they've had much practice.'

Alice could think of nothing better to say than 'Indeed?' but she said it as heartily as she could. They went on a little way in silence after this, the Knight with his eyes shut, muttering to himself, and Alice watching anxiously for the next tumble.

'The great art of riding,' the Knight suddenly began in a loud voice, waving his right arm as he spoke, 'is to keep--' Here the sentence ended as suddenly as it had begun, as the Knight fell heavily on the top of his head exactly in the path where Alice was walking. She was quite frightened this time, and said in an anxious tone, as she picked him up, 'I hope no bones are broken?'

'None to speak of,' the Knight said, as if he didn't mind breaking two or three of them. 'The great art of riding, as I was saying, is--to keep your balance properly. Like this, you know--'

He let go the bridle, and stretched out both his arms to show Alice what he meant, and this time he fell flat on his back, right under the horse's feet.

'It's too ridiculous!' cried Alice, losing all her patience this time. 'You ought to have a wooden horse on wheels, that you ought!'

'Does that kind go smoothly?' the Knight asked in a tone of great interest, clasping his arms round the horse's neck as he spoke, just in time to save himself from tumbling off again.

'Much more smoothly than a live horse,' Alice said, with a little scream of laughter, in spite of all she could do to prevent it.

'I'll get one,' the Knight said thoughtfully to himself. 'One or two--several.'

Fire
Intelligences and their synonyms
Kundalini