There are some rathr oblique references to what happens in seances here - table lifting and knocking.  But the principle reference revolves around the symbolism of chess and Punch and Judy 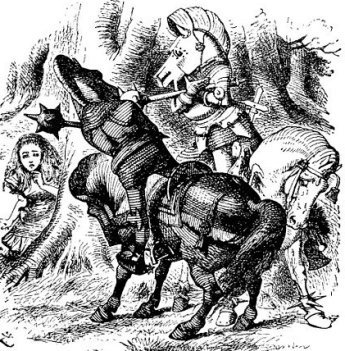 CHAPTER VIII. 'It's my own Invention'

After a while the noise seemed gradually to die away, till all was dead silence, and Alice lifted up her head in some alarm. There was no one to be seen, and her first thought was that she must have been dreaming about the Lion and the Unicorn and those queer Anglo-Saxon Messengers.

However, there was the great dish still lying at her feet, on which she had tried to cut the plum-cake, 'So I wasn't dreaming, after all,' she said to herself, 'unless--unless we're all part of the same dream. Only I do hope it's MY dream, and not the Red King's! I don't like belonging to another person's dream,' she went on in a rather complaining tone:

'I've a great mind to go and wake him, and see what happens!'

At this moment her thoughts were interrupted by a loud shouting of 'Ahoy! Ahoy! Check!' and a Knight dressed in crimson armour came galloping down upon her, brandishing a great club. Just as he reached her, the horse stopped suddenly: 'You're my prisoner!' the Knight cried, as he tumbled off his horse.

Startled as she was, Alice was more frightened for him than for herself at the moment, and watched him with some anxiety as he mounted again.

As soon as he was comfortably in the saddle, he began once more 'You're my--' but here another voice broke in 'Ahoy! Ahoy! Check!' and Alice looked round in some surprise for the new enemy.

This time it was a White Knight. He drew up at Alice's side, and tumbled off his horse just as the Red Knight had done: then he got on again, and the two Knights sat and looked at each other for some time without speaking. Alice looked from one to the other in some bewilderment.

'She's MY prisoner, you know!' the Red Knight said at last.

'Yes, but then I  came and rescued her!' the White Knight replied.

'Well, we must fight for her, then,' said the Red Knight, as he took up his helmet (which hung from the saddle, and was something the shape of a horse's head), and put it on.

'You will observe the Rules of Battle, of course?' the White Knight remarked, putting on his helmet too.

'I always do,' said the Red Knight, and they began banging away at each other with such fury that Alice got behind a tree to be out of the way of the blows.

'I wonder, now, what the Rules of Battle are,' she said to herself, as she watched the fight, timidly peeping out from her hiding-place: 'one Rule seems to be, that if one Knight hits the other, he knocks him off his horse, and if he misses, he tumbles off himself--and another Rule seems to be that they hold their clubs with their arms, as if they were Punch and Judy--What a noise they make when they tumble! Just like a whole set of fire-irons falling into the fender! And how quiet the horses are! They let them get on and off them just as if they were tables!'

Another Rule of Battle, that Alice had not noticed, seemed to be that they always fell on their heads, and the battle ended with their both falling off in this way, side by side: when they got up again, they shook hands, and then the Red Knight mounted and galloped off.

Hero
Hero and the symbolic badges