An identical symbol to the crab, with the added advantage symbolically that one claw is slightly smaller than the other.

The crab is used in the Zodiac sign for Cancer – I have inverted the sign here to help explain the  symbolism of the lobster. In the general sense it represents a person who is a spiritual seeker, but who hasn’t got that far on the spiritual ladder.

The diagram on the right is the by now familiar diagram [I hope!] of the soul cone with spiritual input and spiritual output via the Higher spirit.

The two claws of the lobster are in this context synonymous with the symbolism of horns – the two tunnels that provide spiritual input and spiritual output.  The Shell of the lobster is hard and thus represents the Earth layer and internally it is soft representing the software layers of Air and Water.

It is looking in the direction of the spiritual world – the Aether level as such it is a spiritual traveller.  This person is a seeker but has not achieved enlightenment.  It is a little creature of water – thus it is more connected symbolically to Water.  By definition it is not a creature of the Air, so it still has a long way to go spiritually.

From Alice in Wonderland

'Tis the voice of the Lobster: I heard him declare
"You have baked me too brown, I must sugar my hair."
As a duck with its eyelids, so he with his nose
Trims his belt and his buttons, and turns out his toes.
When the sands are all dry, he is gay as a lark,
And will talk in contemptuous tones of the Shark;
But, when the tide rises and sharks are around,
His voice has a timid and tremulous sound.
I passed by his garden, and marked, with one eye,
How the Owl and the Panther were sharing a pie:
The Panther took pie-crust, and gravy, and meat,
While the Owl had the dish as its share of the treat.
When the pie was all finished, the Owl, as a boon,
Was kindly permitted to pocket the spoon;
While the Panther received knife and fork with a growl,
And concluded the banquet by --- 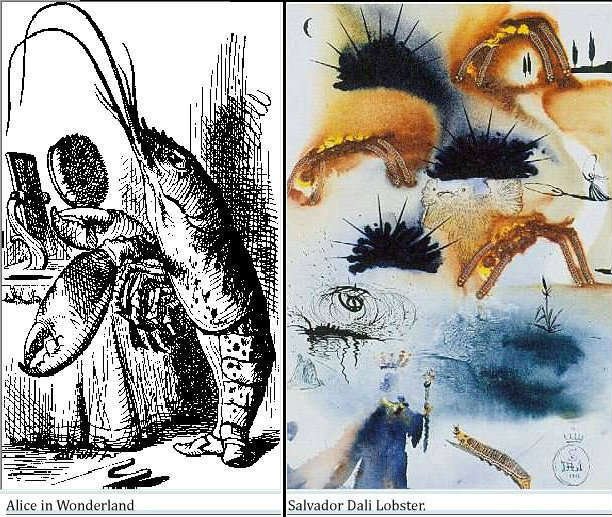