The turtle is a creature of both Water and Earth.  It also lays Eggs, as such it has a creative role.  It can be found on the Shore and this is where it lays its Eggs which adds to the symbolism.

It has a hard shell that resembles the Matrix in its pattern, with a soft interior thus as a whole it is a symbol of the Eggs being ‘hardware’ on the outside and ‘software’  - spirit - on the inside.

It shape is round above, but viewed from below it is square, as such the symbolism of the four sided square as an Earth symbol  comes into play.  Again the turtle is a marriage of the earth and the rest of the egg

Chochod ‘The primordial turtle has a shell that is rounded on the top to represent heaven and square underneath to represent earth’…. 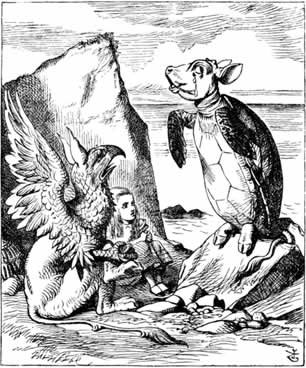 In effect the Turtle is not a symbol of the Creator but the Created, it is symbolically equivalent to the Cow of the Bull and Cow, or the Mother in the Father and Mother pairing.  The fact that it lays its eggs at night adds to the symbolism because the other pairing is the Sun and Moon , as such a turtle is a creature of the Moon.  Nowhere could this symbolism be so aptly captured than in Lewis Carroll’s use of the mock turtle – a creature that is half cow and half turtle.

The final symbolism is derived not from just the longevity of a turtle but how slow it is to grow and move.  The turtle is then an ideal representation of the very slow rate of evolution.

The symbol in use

Both the turtle and tortoise are found as symbols word-wide.  The World Turtle carries the Earth upon its back in myths from North America. In Cheyenne tradition, the great creator spirit Maheo kneads some mud he takes from a coot's beak until it expands so much that only Old Grandmother Turtle can support it on her back. In Mohawk tradition, the trembling or shaking of the Earth is thought of as a sign that the World Turtle is stretching beneath the great weight that she carries.

In a story from Admiralty Island, people are born from eggs laid by the World Turtle. The symbol can be found in ancient Mesopotamia, used by the Yoruba of Nigeria and in Hindu mythology the world rests on the backs of four elephants, who stand on the shell of a turtle. The symbol was used extensively in China.  A carved turtle, known as bixi  was used as a plinth for memorial tablets of high ranking officials during the Sui Dynasty (581-618 CE) and the Ming period (1368-1644 CE). Enormous turtles supported the memorial tablets of emperors.

In Japan, the minogame is a favored motif by netsuke-carvers and other artisans, and features in traditional Japanese wedding ceremonies. There is also a well-known tortoise-shell artistic pattern, based on the nearly hexagonal shape of a tortoise’s shell. These patterns are usually composed of symmetrical hexagons, sometimes with smaller hexagons within them.  Many legends of Vietnam also include the turtle.  And of course Terry Pratchett’s Discworld features the turtle in one of the star roles…