Firstly in all cases, it takes on the symbolism of the bird.

Western symbolism - The owl  is a night bird – night in this context means the world of the physical – the shadow world.  Spiritually the physical world is the world of darkness and the spiritual realm one of light thus the owl is principally a bird that operates in the physical realm, but because it has good eyesight it can guide those who have not yet obtained their ‘eyes’.  Thus an owl is a teacher of spiritual things.

But in some cultures what it teaches is knowledge and not wisdom because it does not operate in the Light.  It is thus representative of cleverness but not wisdom – like A A Milne’s Owl.  In Western cultures therefore the symbol of an owl is not necessarily positive – the pompous  intellectual might be described as an owl.

Eastern symbolism - BUT in eastern cultures the symbolism can be different.  If we take an example, a Ninja or anyone practising Shinto who has had his or her spiritual awakening is symbolised as an ‘owl’.  The owl is also credited with wisdom because spiritual awakening opens the mind, through your Higher spirit to the wisdom of the spiritual word.  The fact it is a night bird is not negative in Eastern symbolism.  Here Night is seen in the context of the Four seasons and the hours and thus a stage on the spiritual path.

Dr Masaaki Hatsumi  -  Essence of Ninjutsu
You will be laughed at by owls unless you know these things… when you walk through the dark world of desires, owls can be your good guides.
A true Ninja can see through everything in the word of  desires. 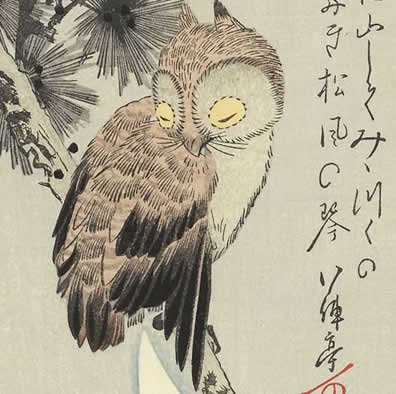