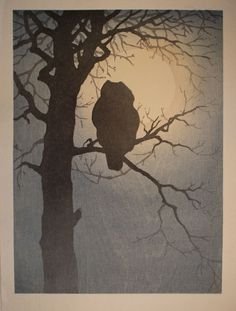 Spiritual darkness, the insecurity of ignorance and fear pervade the world in which we move.

Maeterlinck is perhaps one of the first prophets …..This atmosphere Maeterlinck creates principally by purely artistic means. His material machinery (gloomy mountains, moonlight, marshes, wind, the cries of owls etc.) plays really a symbolic role and helps to give the inner note.

Maeterlinck's principal technical weapon is his use of words. The word may express an inner harmony. This inner harmony springs partly, perhaps principally, from the object which it names. But if the object is not itself seen, but only its name heard, the mind of the hearer receives an abstract impression only, that is to say as of the object dematerialised, and a corresponding vibration is immediately set up in the heart.

The apt use of a word (in its poetical meaning), repetition of this word, twice, three times or even more frequently, according to the need of the poem, will not only tend to intensify the inner harmony but also bring to light unsuspected spiritual properties of the word itself. Further than that, frequent repetition of a word (again a favourite game of children, which is forgotten in after life) deprives the word of its original external meaning. Similarly, in drawing, the abstract message of the object drawn tends to be forgotten and its meaning lost.

Sometimes perhaps we unconsciously hear this real harmony sounding together with the material or later on with the non-material sense of the object. But in the latter case the true harmony exercises a direct impression on the soul. The soul undergoes an emotion which has no relation to any definite object, an emotion more complicated, I might say more super-sensuous than the emotion caused by the sound of a bell or of a stringed instrument.

This line of development offers great possibilities to the literature of the future.

In an embryonic form this word-power-has already been used in Serres Chaudes. As  Maeterlinck uses them, words which seem at first to create only a neutral impression have really a more subtle value. Even a familiar word like "hair," if used in a certain way can intensify an atmosphere of sorrow or despair.

And this is Maeterlinck's method.

He shows that thunder, lightning and a moon behind driving clouds, in themselves material means, can be used in the theatre to create a greater sense of terror than they do in nature.