Ancient Egyptian - The symbolism of the four sons of Horus

Even today, the Egyptian flag incorporates this symbolism

The four sons of Horus symbolically represent the Cardinal directions.  Their clothing is coloured - White, Red, Yellow and Green.

Yellow is East, White is North, Red is West and Green - sometimes Black - is South.

Thus anyone who had come from the East was termed 'yellow', anyone from the South 'green or black', anyone from the North 'white' and anyone from the West 'red'.  It is why Native Americans were called Red Indians - Indians [locals] who came from the west.  The terms - because the symbolism is not understood - are now thought to be offensive and racist, but at the time they were used, no offence was ever meant.  It is also of course not offensive to call anyone 'black' if they come from Africa, as Africa as a continent is south of most other places.

It may be a bit confusing, however, as both President Obama and Presidents Reagan, Bush and Kennedy are Red [symbolically]. 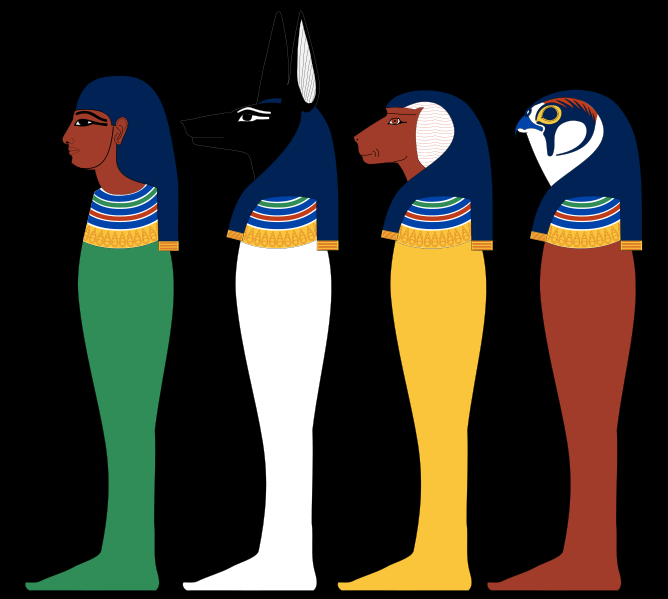 The canopic jars, which accompanied mummified bodies used identical colour coding. Since the heart was thought to embody the ba -  higher spirit, on actual death - it was left inside the body. The brain was thought only to be a processor of input from the rest of the body, so it was reduced to liquid, syphoned off, and discarded. The organs were the various seats of the emotions – like the Chinese system - and were placed in the jars corresponding to their place in the scheme of the body viewed as a symbolic object. 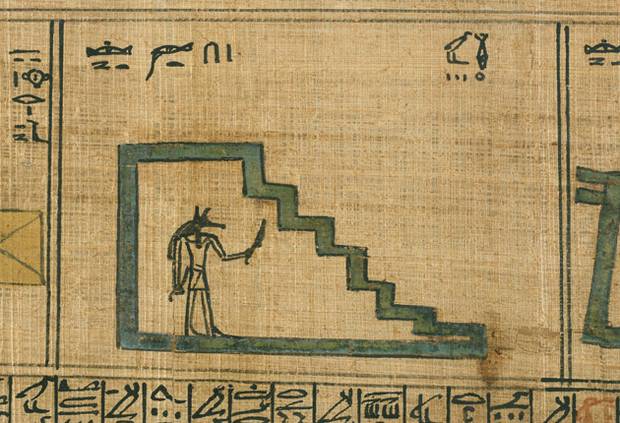 The earliest reference to the sons of Horus is found in the Pyramid Texts where they are described as 'friends of the king', as they assist the king in his 'ascension to heaven in the eastern sky by means of ladders'.  In effect the bodily organs represented by the cardinal directions help in achieving enlightenment  - celestial pole and ladders are symbolically the same here.

Their association with Horus specifically goes back to the Old Kingdom when they were said not only to be his children but also his souls.  Thus a person not only has his own soul but is formed of the souls of his organs - each aggregate has a soul.

On rebirth, a person perceives himself to be dismembered and each part of him rewritten and reassembed in a new better form.  As a person is an aggregate of all his body parts these too are rewritten - he is given new powers.  "these parts of the 'deceased' pharaoh, referred to as the Osiris, were seen as parts of Horus, or rather, his children".

There is also a link here with the symbol of beheading.

In Spell 151 of the Book of the Dead Hapi is given the following words to say: "I have come to be your protection. I have bound your head and your limbs for you. I have smitten your enemies beneath you for you, and given you your head, eternally."

During the rebirth ceremony actual people appear to have taken a position at the side of the person undergoing the ceremony, to ensure they did not actually die and to revive the person.

It seems that Imsety’s role, for example, was to help revivify the person after rebirth had taken place – get him out of his trance and death like state, as Horus says: "You have come to N; betake yourself beneath him and lift him up, do not be far from him, (even) N, in your name of Imsety."  To stand up meant to be active and thus alive while to be prone signified death. Incidentally, unless the person was revived correctly it could have meant actual death.

We have  a further indication that real people placed themselves in a position of the cardinal directions in order to help an initiate in Spell 151 of the Book of the Dead, when Duamutef is given the following words to say: "I have come to rescue my father Osiris from his assailant."  Osiris here is a role - all initiates who have been through rebirth are in essence Osiris, thus the helper is also helping with the revival.

Qebehsenuef protected the intestines of the deceased. It appears that his role was to refresh the resurrected person, and his name means literally "he who libates his siblings". Libation is to shower with cool water.  Horus commands him, "Come refresh my father; betake yourself to him in your name of Qebehsenuef. You have come that you may make coolness for him after you ... " 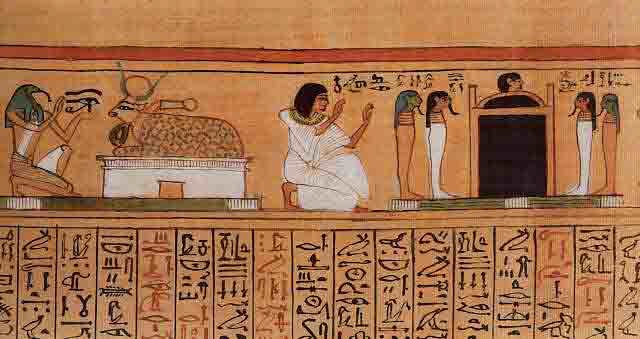 Not colour coded here - but 4 people attending a 'coffin'

“There is a sense of a dual function of cleansing and refreshing them”.

In Spell 151 of the Book of the Dead Qebehsenuef is given the following words to say: "I am your son, Osiris, I have come to be your protection. I have united your bones for you, I have assembled your limbs for you. I have brought you your heart, and placed it for you at its place in your body."